Advertisement
You are here: Home » Can We Build a Nuclear Bomb Shelter at Home?
Advertisement

North America, India, and many European countries are presently at risk of getting involved in some war. There are countries whose governments are much more active to protect their citizens. So they already have some sort of bomb shelter either in their basement or backyard. The title of this article starts with “Can We Build” because you need to judge your situation (monetary fund, technical expertise, amount of shielding required) to start planning.

Judge Your City’s Probability to be Under a Nuclear Attack

There is no Do-it-Yourself method to build a nuclear bomb shelter closer to the location of a nuclear explosion. Thankfully most of the North Americans, Indians and Europeans live in places which are relatively safe from a direct hit of nuke but essentially we need a bomb shelter and some protection against the fall outs. At 100 km from the explosion site, your only real threat from the immediate explosion is to be blinded by the flash, and fallout that is going to be too difficult to predict as that varies greatly with burst altitude, wind direction, wind speed and so on. These kinds of cities are more prone to non-nuclear air raids as the enemies will try to blow away the connection with the larger city and often these cities are marketplaces of the food-producing villages.

You will need approximately 12 feet by 22 feet area to build a nuclear bomb shelter. You need to build it near a water source which is unlikely to get contaminated by fallout. River water may carry radioactive materials and the risk of filtering is making the filter a source of radioactive materials. Water from deep wells and covered reservoirs into which no fallout particles or fallout-contaminated water has been introduced are safer. You need sufficient air and the air if purified by a HEPA filter is better. So as you can see, you need electricity to get safe water and safe air.

You’ll get grid electricity till enemies have not disconnected the sources. Of course, it is your primary source of electricity. But you need backup with solar and generators. That simply means you need a very large lithium-ion battery and enough fuel to operate the generator. Your need for power will be around 20 Units per day. That is huge. Because under the earth, you’ll need either heating or cooling. Electricity is the most challenging issue.

Plan Where You’ll Build One

It is better to have the primary/main entry point closer to your house and an emergency exit point which will lead to the door of your house. Both of these should be at right angles to the cavity so that gamma rays can not enter. The emergency exit point should be deceptive and have a grenade sump. It is better to build the construction in the backyard/garden below the entry pathway, lawn, trees etc. The larger will be the trees, the more deceptive they will be. The larger you’ll need the trees, the deeper will be construction. More deep will be the construction, and the cost to build will increase. Building a nuclear bomb shelter below the main building is a compromise as it can weaken the main building. 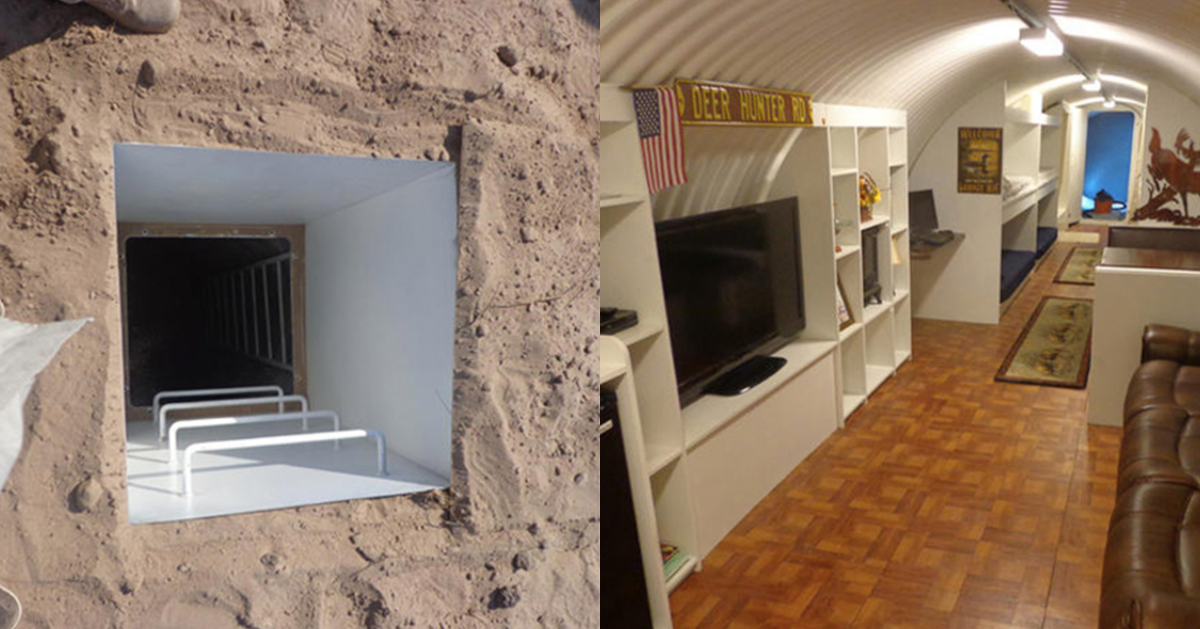 In some countries, laws may not directly allow building a “hidden underground chamber” but the persons used with civil construction know to overcome the legal tangle by showing the construction as a part of your business/office. You need the record of the construction to your local government at least as an office. Police may suspect you if you create an underground construction hidden from the local authority. A civil contractor and specialized services to build bomb shelters know how to defend the client.

You’ll need an iron joist to build the roof of the bomb shelter. The rest of the civil construction materials are easily available in India and North America. Because your shelter can hardly accommodate 5 people, you probably want to hide it from the neighbours. You can help your neighbours in some other way for disaster preparedness.

The rest of the materials are concrete blocks, sand, cement, iron bars, stones, square mesh and some custom-made heavy iron gates which can sustain blow from an explosion. You need a civil contractor since the pressure of the earth can collapse the side walls. If you make the side walls double-walled and add a slant in-between then the grenade will be less effective and the chance of radiation entering will be less.

Whether we can build a nuclear bomb shelter at home or not depends on our location and existing resources. It is a costly affair but worth investing in since not all the countries on this earth are peaceful.

Articles Related to Can We Build a Nuclear Bomb Shelter at Home?