There are 15 important items on a motherboard:

Before buying a motherboard, you should always learn about its characteristics such as the type of connectors it has. 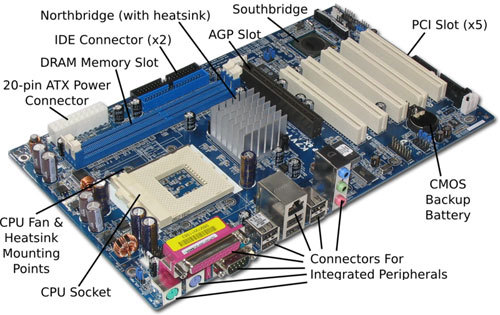 The role of these components in a Motherboard

Each element is important on a motherboard, some more than others. Here are their uses:

ISA slot: not found on newer PCs, it is used to connect slower cards.

Parallel port: used to connect the printer to the motherboard.

Serial Port: Used to connect serial mouse to the motherboard.

PS2 ports: used to connect the mouse and keyboard to the motherboard.

Chipset: This is an electronic circuit that is responsible for coordinating the exchange of data between PC components. It is in 2 parts: one located to the processor called NorthBridge (north bridge) does the processor, memory and the AGP bus, and one located toward the PCI slots is called Southbridge (south bridge) is responsible for PCI bus (and on the old PC’s ISA bus), IDE connector, the floppy connector, BIOS, USB port.

Power connector: it serves to connect the power supply to the motherboard. It provides the electricity needed for proper functioning of the PC.

Memory connector: it can either be a connector SIMM (no longer on newer PCs) or DIMM slot. Memory is placed vertically on these connectors. The DIMMs fit easily with a lever.

IDE connector: Used to connect an IDE cable that connects a drive (CD or DVD) or hard disk to the motherboard.

CMOS battery: a small battery (flat) that does not consume much electricity is used to keep track of the initialization settings of the computer. It is also used to operate the PC’s internal clock so if you see that the time is that the malfunctioning battery is not good is it to be changed.

The BIOS is a small program stored in a ROM for performing exchange of information between the operating system (usually Windows) and the motherboard.

Support for processor is the most important component. It serves to connect the processor to the motherboard. It comes in two forms.

There’s the slot that resembles an expandable AGP . It has a rectangular shape, the processor connects vertically on this type of connector.

The other support is the socket that is square with many small holes (sockets) on it. The two major manufacturers of processors have different sockets.

If for example you buy an Intel processor and two years later you decide to change it to an AMD processor, you could not do that because the sockets are different and therefore you have to clench replacing the motherboard and buy one with a socket for AMD.

But what makes the choice of a motherboard even harder is that each manufacturer processor (we are speaking only processors of Intel and AMD) there are different sockets.

This Article Has Been Shared 479 Times!

Articles Related to Components of a motherboard