Advertisement
You are here: Home » Test and review of Mozilla Firefox 4.0 : a must have browser
Advertisement

Frankly overwhelmed by the latest versions of Google Chrome, Opera and Safari, Firefox 3.6 was still a good browser, but in terms of usability or performance, was losing the needed look for today.

The interface of Firefox 4 is no longer a secret to anyone from having a long gestation displayed by different models even before the publication of the first beta. In short, it is like for Opera since version 10.5, a version a little less extreme minimalism of Chrome. 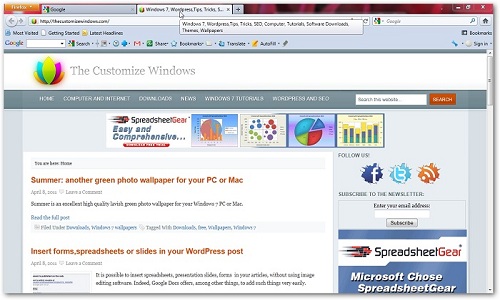 The menu bar disappears, giving way to a accessible menu; just like Opera from a button on the top left of the window. The tabs located above the toolbars and interface gives pride to Aero (in Windows 7) to its competitors. If you fancy a more traditional arrangement may still revert to the behavior of version 3: tabs below the toolbar and menu bar can be restored.

Just like Opera, Firefox does not opt ??for a single address bar that also includes the search bar. This feature cuts both ways makes life easier for beginners, but has some unpleasant side effects: looking for a word, turn your search keyword and it will be gone! With two separate bars, the words are displayed and you can switch from one engine to another without having to enter them again.

From the standpoint of integration with Windows 7, or almost all there: optional management previews of tabs in the taskbar, integration of the progress bar downloads, Jumplist … lacks from Google Chrome or IE9 the management of Aero Snap tabs, and of course the sites singled out for IE9 exclusive to Microsoft’s browser.

Finally, the Firefox interface leaves four overall positive impression even if it appears at times a bit messy: you feel that Mozilla wanted to build Google Chrome, but gets away with a result less successful than its model or Internet Explorer 9: Some buttons are not visible, the menu bar that can optionally display suffers from a lack of clarity and one wonders why the Firefox menu is divided into two panels, may be to distinguish the main features of those regarding the appearance and extensions. Nevertheless, progress in relation to older Firefox 3 are obvious. 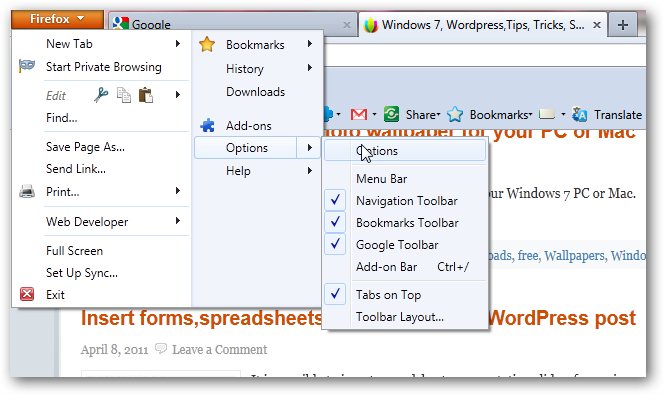 Firefox 4 introduces several new features for managing tabs, knowing that were more or less included in Opera 11. The first is the ability to pin a tab to reduce it to its icon and prevent its closure. This can be useful for web applications like Gmail that you want to keep them separate.

The second feature is the creation of groups of tabs that can rearrange at will. Unlike Opera, however, which simply drag and drop tabs in the bar, Firefox 4 passes through a kind of workspace on which we draw the blocks. These may include tabs, which can move from one block to another. In some ways, virtual offices of tabs rather convenient to use, but which lack a feature that was handy: these blocks back to find them later! Anyway, this view can be handy to get an overview of open tabs, especially since it is possible to conduct searches. 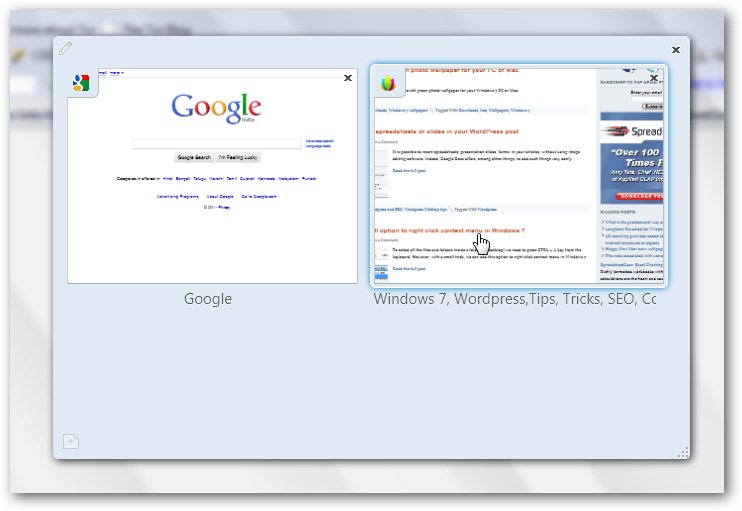 Firefox 4.0 now includes standard sync functionality which allows you to synchronize bookmarks, history, open tabs, passwords and preferences between multiple computers running Firefox. The operation is however more restrictive, but probably safer than what is proposed Google Chrome or Opera. In fact, Firefox Sync does not merely an online account, but requires a computer “teacher” to which we add other machines: computers running Firefox, Mobile smartphones running Firefox. However, unlike Chrome, Firefox does not synchronize the extensions and themes of an instance of the browser to another.

The extensions have always been the greatest strength of Firefox and Mozilla version 4.0 brings several new features in this area. For the user, the most visible will be the new management interface extensions, which now takes the form of a page in a tab. This page provides access to integrated and extended catalog of extensions, themes and plugins installed more comfortable.
Apart from this new page, Firefox 4 is primarily an opportunity for Mozilla to propose a new SDK to develop extensions using standard technologies such as JavaScript, CSS and HTML. These extensions complement existing ones and using XUL, always compatible with most version 4. The advantage of the extensions developed with Add On SDK (formerly Jetpack) is not requiring a reboot, like extensions of Google Chrome, Opera or Safari. Currently, Mozilla claims to have no intention of stopping term support of classical extensions.
No change in hand as regards the management of bookmarks, which is always a highlight of the browser interface is a nice organization, and bookmarks can be enhanced with keywords to locate them more easily the address bar. Bookmarks can be imported and exported to HTML or JSON.

Nothing new either in terms downloads: the manager is still functional and supports resumption of interrupted downloads after restarting the browser just like Safari or Opera.

We conclude this overview of the features RSS feeds: again nothing new, or rather if, but not in the sense that we would like. So far as Firefox was one of the nicest browsers to use to subscribe to the RSS feed for a page, the button to subscribe from the address bar has been disappeared! It is possible to recover, it takes the form of an extra button, instead of an icon integrated into the address bar. Fortunately, Mozilla has not touched the excellent management of RSS except this detail: you can always subscribe by clicking on a feed via Netvibes, Yahoo or Google Reader, or his favorite desktop application. RSS bookmarks are also present.

On the security side, we take the same and again: the browser still offers two options to protect themselves against malicious websites and against counterfeits, from a black list is regularly updated. Secure sites, in contrast, are clearly identified by their certificate, but we regret that the URL does not reveal the primary domain as does IE 9, Chrome or Opera exhilarating the rest of the address.

Private Browsing is still in the game: In this mode, the browser does not save any passwords, cookies or browsing history. The private browsing mode can also be activated permanently. A new tool has also been introduced: an anti tracking, activated or disabled at will on the part of the advanced browser. However unlike Internet Explorer 9, it is currently impossible to customize in detail.

Even if Firefox does not use four separate processes for tabs in the image of Google Chrome, it still uses a separate process for managing plug-ins as does Safari on Mac OS X.

Without being a bad student regarding performance, Firefox 3.6 began seriously lagging behind its competitors, including Google Chrome, Opera and Safari. The new rendering engine Gecko 2.0 and the new JavaScript runtime JÃ¤germonkey integrated into this version 4 keep all their promises.

The JavaScript engine of Firefox 4.0 is below the Chakra Internet Explorer 9 on the SunSpider test, but doing better on V8 test of Google.

Concerning the implementation of Canvas for 2D graphics, Firefox 4 will also open, as IE9, hardware acceleration via Direct2D. The results obtained both on the benchmarks established by Microsoft and independent tests show results that are slightly below those of IE9, but higher than Google Chrome 10 (for which hardware acceleration Canvas is always off default).

However, we note, while Firefox 3.6 has made great progress on this point, a net increase in consumption of RAM. Over 700 MB with 20 tabs open when Firefox 3.6 comes to about 400 MB with the same sites.

Firefox 4 also improved its compatibility with the latest web standards, including HTML5 and CSS3. Version 4 is well supported format WebM Google regarding the video. This support will potentially shift the balance in terms of compatibility: the time when Google plans to abandon the H264, it would be three and Ogg WebM browsers (Firefox, Opera and Chrome), and two H264 browsers  (Safari and Internet Explorer).

The browser also improves its support for CSS3, with better compatibility with fonts ‘web fonts’ and partial support for CSS transitions. So far, only browsers using WebKit allows to use them. Everything Safari or Google Chrome to see is not yet supported, but it’s a start …

Finally, note that Firefox with Google Chrome 4 is the only browser to support WebGL to display 3D on the web. Again, compatibility is more experimental: only a few sites like Body of Google Browser benefiting. Nevertheless, it is significant to note that overall, Firefox 4 will be at the forefront of compatibility with the latest standards, just behind Google Chrome.

Let us be frank: we love this new Firefox. The interface undergone a facelift, although it is difficult to know who has copied Opera or Firefox on the other … The older versions used to be able to restore most of the behavior of Firefox 3, and newbies will find a browser that is clean and easy to use.

Also good at all on performance and compatibility HTML5/CSS3, improved compared to a version 3.6, which began to lag behind. At a time when all browsers seem to finally go more or less in the same direction, they will perhaps finally enjoy a true standardization of the web, and it will need a browser performance and avant-garde, what becomes Firefox . We regret the impact still heavier on the RAM compared to Firefox 3.6 on our test machine.

New Firefox has lot of features look alike of Mac OS X : that simple, elegant design. Creation of group tab simply look like Expose of Mac, the letters, fonts, mouse hover effect: all is Mac-ish, which will definitely be liked and welcomed by the new generation who knows to adore the design elegance, simplicity yet powerful core, particularly with the rise of iPad usage.

The checkboxes, dropdown menus, search boxes in webpages looks more gorgeous in Mac because of its Aqua interface; where as in Windows 7, the ugly old Windows 98 styled check boxes really looks bad. That is a problem of Windows and not of Firefox 4 for sure.

In the end, although some will prefer a Google Chrome definitely which has mastered the maximum simplicity (sync with the Google Account address bar only) or Safari more reassuring and more integrated into Mac OS or Opera with more glassy look on Windows 7, Firefox at the top and back this is a great news!

Tagged With firefox 4 review , must have browsers

Articles Related to Test and review of Mozilla Firefox 4.0 : a must have browser

Cite this article as: Abhishek Ghosh, "Test and review of Mozilla Firefox 4.0 : a must have browser," in The Customize Windows, April 8, 2011, September 26, 2021, https://thecustomizewindows.com/2011/04/test-and-review-of-mozilla-firefox-4-0-a-must-have-browser/.
Source:The Customize Windows, JiMA.in