Advertisement
You are here: Home » Echo Parakeet Wallpaper for your Windows PC and Apple Mac

Echo Parakeet Wallpaper is featured in Wikipedia, it is taken by colhou in Flicker.

This work is licensed under a Creative Commons Generic 2.0 License.

Echo parakeet (Psittacula eques echo), the rarest Parrokeet in the world, saved from extinction by captive breeding programme at the Durrell trust Blackwater Gorge. The Mauritius Parakeet, also known as Echo Parakeet. Its local name is katover.
It is generally similar to the Rose-ringed Parakeet”its closest living relative”except that the Mascarenes bird is a stockier species with a markedly shorter tail and a more intensive emerald green. The females lack the neck collar, and notably possess an all-black beak, unlike the males which have a red upper beak. The latter feature is notably absent in the Rose-ringed Parakeet as well as the Alexandrine Parakeet. (Source : WikiPedia) 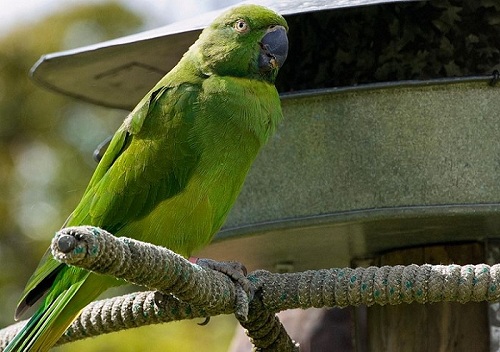