I got an email today from a friend with two screenshots of my Twitter conversations with an unknown girl. I can not even recall when I last logged on to Twitter. As my account was hacked ago, I first changed the password. I really never thought about the possibility of fake screenshots. I thanked my friend and said him about the possibility of getting hacked. The next reply with two urls was enough shocking to me.

No, no one need to hack other’s account to create such fake screenshots of Twitter conversations. Obviously you might be thinking of any photo manipulation software like Adobe Photoshop. Creating such fake Screenshots of Twitter conversations will take at least 15 minutes. No offense to Richard Stallman or Bill Gates, but you can see in this composite fake screenshots, both are actually saying the opposite : 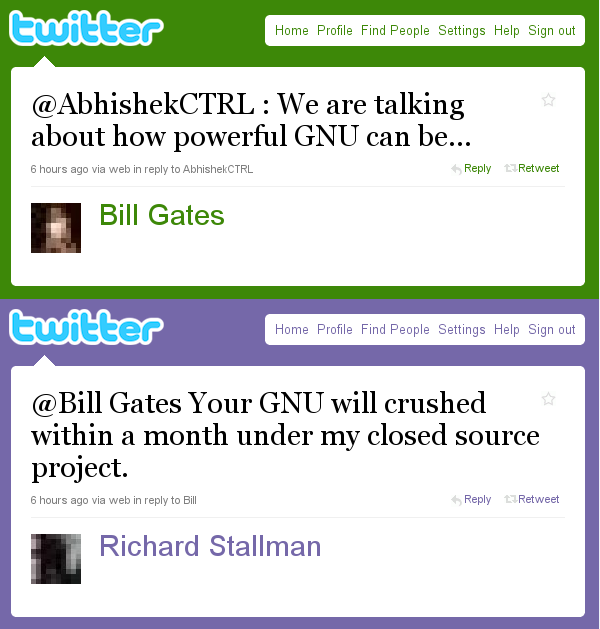 Not looking great or can be understood as Fake Screenshots, right? If I had spent a more time to create I could have use the right user profiles too. This is such an website where you can create.
My friend sent mine after a bit Photoshopping as well.

Here is the way for fake screenshots for Facebook.

May be these apps are created for ?creating funny Fake Screenshots, as there will be no real url. But there are publicly available fake screenshots creators which can create passport, bills, scanned documents – almost any kind, we have not posted the urls because of potential danger by abusing them. Some of the urls which creates more advanced fake screenshots have been blacklisted by most of the search engines. But as some of these dangerous Fake Screenshots creators?are somewhere hosted where ?these are not much of legal concern, these are existing.

Not only fake screenshots, fake pure HTML emails from any e-mail address can be sent one such app.

Articles Related to Fake Screenshots – You Must Be Aware of