Advertisement
You are here: Home » Robot Pet AIBO : Art and Technology of a Dead Robot
Advertisement

Robot Pet AIBO was a commercial production from Sony which has been out of production since 2006. What made AIBO to stand out from the Robot Pet crowd ? AIBO in Japanese means “partner” as well as an it is an abbreviation for Artificial Intelligence roBOt. AIBO is an entertainment robot from the Japanese electronics giant Sony has been developed as a toy. With AIBO Sony pioneered the introduction of Robot Pet. In total, more than 150,000 Robot Pet AIBO have been sold by Sony. On 26 January 2006, Sony announced to withdraw the production of the Robot Pet AIBO. Robot Pet AIBO is not only the Robot Pet, there are other such ‘animals’ are offered by different brands. CNET News, at that time wrote “The demise of Sony’s robots do mark a victory of sorts for U.S. robot makers like iRobot.”

Robot Pet AIBO was designed to receive information about its environment using a camera, microphones and also limited tactile feedback. This information was processed in an internal computer. The output of this computer was when delivered in an imitation of domestic dog – the typical behavior, such as four-legged speed, non-verbal communication through movement of ears and tail, on-the-ground-roll, etc. This became the hallmark of any Robot Pet later. There were also a tone or voice output and LEDs which simulated the “mood” of the device directly. In 2006, with the release of the software “Mind 3” Robot Pet AIBO could publish self-made pictures to the Internet daily in Robo blog.

An essential property of Robot Pet AIBO was that they could be programmed via a defined interface by Sony (OPEN-R) from scratch. While Sony suggested advanced home users to develop in this way new “dog personalities,” Robot Pet AIBO in this context is important. 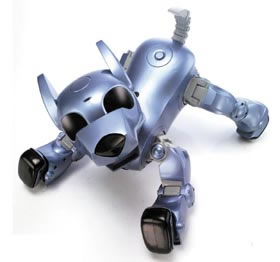 This market of Robot Pet AIBO, made various other brands to develop quite similar and some more advanced Robot Pet. At the time Robot Pet AIBO was developed and marketed, a big part of the community was not prepared to accept AIBO as Robot Pet, but just a toy.

Tagged With AIBO , robot pets , what is a pet aibo

This Article Has Been Shared 341 Times!

Articles Related to Robot Pet AIBO : Art and Technology of a Dead Robot