Advertisement
You are here: Home » XAMPP : The Easiest Software To Install LAMP
Advertisement

XAMPP is a compilation of free software in the context of the LAMP system. XAMPP makes it easy to install and configure Apache, MySQL, PHP and others. We have published an article on LAMP (Linux, Apache, MySQL, PHP) and shown you how to install  Apache, MySQL, PHP on a computer to use it as an publicly accessible web server. We said ‘a computer’ – basically it is a VPS in that example. The aim of XAMPP is to achieve a very simple installation. XAMPP is not meant for use as a production system as a public Web server (that is why we have installed Apache, MySQL, PHP  separately in that guide) but XAMPP is an excellent software mainly for testing web softwares or CMS like WordPress on local computer without a real server working on Internet.

XAMPP has a meaning. X stands for the different operating systems on which it can be used, A for Apache, M for MySQL, and P for PHP and others.

Example Guides Where We Have Used XAMPP

We have shown, how to install WordPress on Windows 7 to test themes and plugins offline using XAMPP and How to Install Cloud OS eyeOS on local Hard Disk using XAMPP. These are just few examples, practically almost all CMS which are intended to run on LAMP server, like vBulletin, MediaWiki can be tested using XAMPP.

Features and Functions of XAMPP 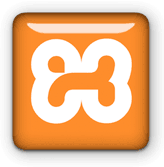 XAMPP also contains other useful tools such as FTP servers ProFTPd or FileZilla server, the mail server Mercury, phpMyAdmin, Webalizer and OpenSSL . Since version 1.7.4 XAMPP for Windows also has the Apache Tomcat 7 , allowing the execution of Java Server Pages and Java servlets.

Originally, the respective versions, depending on the operating system like LAMPP (Linux), MAMPP (MAC) or WAMPP (Windows) were used. Because of possible confusion and the establishment of a standardized product name all the packages is now called XAMPP.

Usage of XAMPP for running a real publicly available web host through Internet, is not recommended for security reasons.

Articles Related to XAMPP : The Easiest Software To Install LAMP