What is Noise in Digital Photography

In electronic imaging device using CCD  and CMOS sensors, noise is too much obvious when image taken at dark. Reason for this noise is individual photosensitive elements or pixels. With appropriate post-processing method, this undesirable effect can be suppressed. Since the dark varies from pixel to pixel, these variations can be done by subtraction of the dark portions.

In addition to the dark noise, there are also portions of the image noise, which depend on the amount of light received. This includes the shot noise obtained by the random distribution of the number of photons produced which impinge in a pixel and small random fluctuations of the light sensitivity of the pixels also frequently called as photon noise.

Noise in an image sensor is noticeable at high ISO light sensitivity. Noise is also influenced by pixel size and pixel pitch of the image sensor. 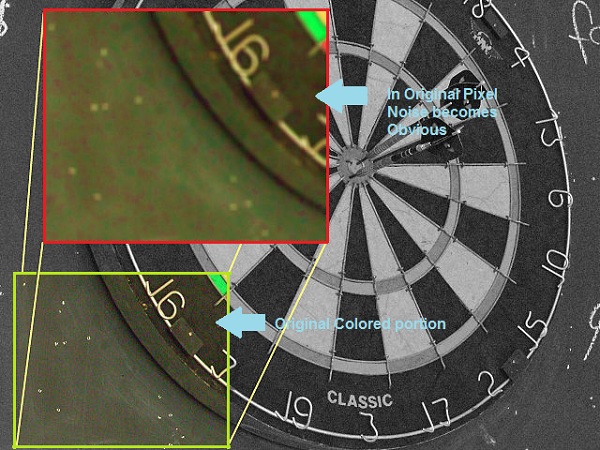 Pure noise is said when no image information is present. The accompanying pictures give two-dimensional examples of pure color noise with a typical power spectral density distribution

Color noise is said when in the color channels of a digital image exists independent random signals.

In addition to the pixel noise described in many digital cameras, random noise pattern comes at very low frequency in the form of cloudy color pattern. The amount of noise depends primarily on the quality of the digital camera. Significant impact is the size of each pixel. At the same image resolution a small sensor is generally produces a higher noise than a large sensor with a lower density. Furthermore, the quality of the analog signal processing and analog-digital conversion and the ISO sensitivity has the greatest influence on image quality.

Correction can be done inside the camera by in built software or by software installed on a Computer, after downloading the image. Unfortunately, images with very bad Noise is actually produced by low end digital cameras which mostly has no way to get the uncompressed Digital Negative format or equivalent image RAW format but a compressed jpeg format. In other words, if the noise is due to low end digital camera or a camera of smaller device, there is practically no way to make the image fully clean.

This Article Has Been Shared 909 Times!