Programming Language is a formal language for giving instructions to a computer or automated device which can be automatically translated into machine code.

As we are actually not going in to very academic details of Programming Languages, but only to give an idea of what is Programming Language, we will complete the article with more practical examples. Alphabetically the list starts with ActionScript 3.0 and ends with XL. The most commonly used and at least heard by an average user, C++ , PHP, CURL, Visual BASIC are examples of some examples.

One example can make the usage of Programming Language clearer to the readers. PHP is a server side programing language, WordPress for example uses PHP for creation of blogs and websites. As WordPress is a Open Source Software, anyone can download and read the documentation of Source Code. Like you can easily read the Function Reference of remove action of WordPress. We can edit PHP or other programming Language with advanced text editor like gedit : 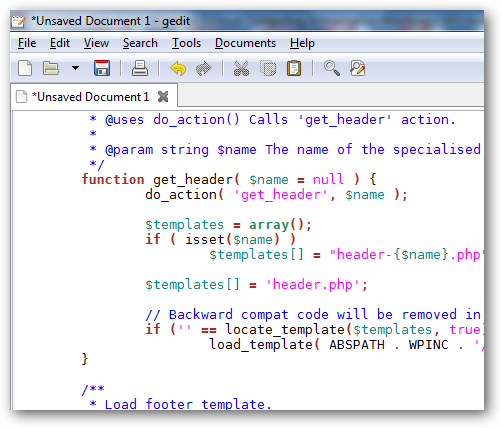 The markup can be highlighted like the above screenshot to make a bit easier to handle manually. This manually creation and modification of a Programming Language (or rather a script) is known as hand coding. Machine coding is usually denoted by creation of scripts with some softwares.