AdWords to Increase SERP – does it making you feeling like a scam ? With good content AdWords can increase your SERP because of several reasons with control. But yes, there are several tricks needed to control the huge automated system which basically has a separate criteria to mark any content as spam. AdWords to Increase SERP technique is nothing new, all major brands deliberately uses AdWords, even for their homepage when homepage is actually at #1.

Newbie means less fund, less experience. An SEO will take $100 per month or more only for offsite optimization. That amount is too, quoted by C segment sedans.  Among these C Segment Sedans, there are actually some hatchbacks with a box added to make it look like a Sedan.

In other words, as a newbie you have enough  reasons to think you will get ripped off by these SEO guys.

AdWords to Increase SERP : The logic

There are various types to Google Bots. All are types of Multi Agent System (MAS) and related to robotics. The bot used by Google for AdWords is one of the most advanced and most frequently updated bot, its from logic (we are coming on that later), quite obviously, Google will not come and say me about their bots.

You get 100% confirmed that except the owners of Google, no one knows the actual full coding of the Google bots. Its quite obvious. No company which has well educated intelligent owners, will never leak the full formula – the employees of any rank can flip the coin.

By the way, in one official infographic, Google pointed the same point I am saying – they do increase SERP of good content pages using AdWords.

Quite obviously its not that they manually increase it. AdWords to Increase SERP is no cheat sheet. Be logical.

Now, why I am saying bot used by Google for AdWords is one of the most advanced and most frequently updated bot. If you go to Keywords section of any Adgroup in your AdWords account, within few seconds after adding a new keyword, it will give you the analysis report, its from our one campaign : 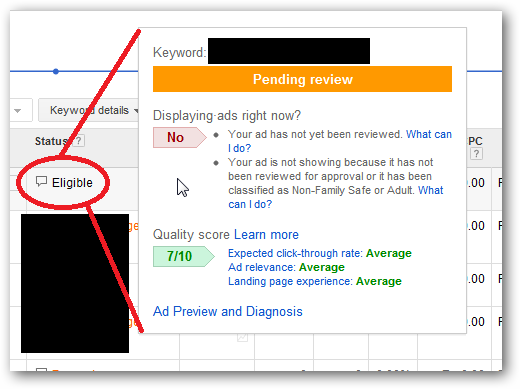 So the logic for using AdWords to Increase SERP are nothing but a paid thorough kind of forced crawl with a manual review – as ours was an important keyword, despite its a text Ad it showing Pending review. A human (Google employee) will review it.

Always pause or delete low quality score keywords.  To rightly use AdWords to Increase SERP, you really need to do a huge work behind one campaign.

The added Advantage of using AdWords apart from AdWords to Increase SERP is – the CPC of AdSense will increase as AdSense bot will also deliver targeted Ads by other Advertisers !

To do List for using AdWords to Increase SERP :

Tagged With adwords Click bot , adwords how to target serp , does adwords improve serp? , your clicks in adwords influence serp

This Article Has Been Shared 147 Times!