Kernel Panic is an output error message without graphical interface when an UNIX or UNIX Like Operating System like Mac OS X is halted in an undefined state. The term Kernel Panic is mainly used in the context of the UNIX Like Operating Systems and is name based on the name subroutine panic() function. Possible causes of a kernel panic can be a hardware failure, faulty memory accesses or a software bug.

Kernel Panic sometimes compared with Blue Screen of Death (BSOD) of Microsoft Windows Operating System and Kernel Panic in Mac OS X is frequently said as Black Screen. Technically however, Kernel Panic is not comparable with BSOD. The reason is, unlike Microsoft Windows, Unix kernel has runtime correctness with assertions as the fault detection mechanism. When the basic assumption that the hardware and the software is not correctly correctly, results a failure which is basically a voluntary halt to all system activity and resulting in Kernel Panic. Unlike BSOD,  Kernel Panic is typical at startup, although in too much altered or modified UNIX Like Operating Systems, like Mac OS X, Kernel Panic can get triggered even when the system is running. Kernel panics appear in Linux as kernel oops. In that state, Linux can kill process itself. This makes Linux ahead to be a suitable OS for the Servers. 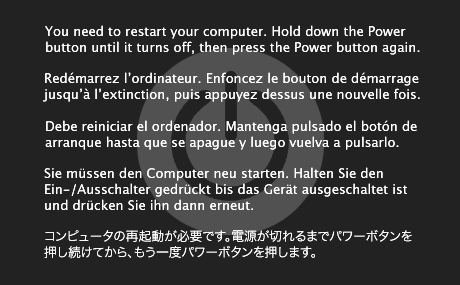 Kernel Panic can happen for a gross hardware loss or damage. But most cases of Kernel Panic is due to software bug or if an incompatible driver is installed for a hardware component.

The later typical Kernel Panic is usual for those who run Mac OS X on PC with Darwin or other Bootloader forcibly (known as Hackintosh) as the drivers are not official release and has bugs.

Third Party Software itself can create  Kernel Panic in Legit setup of Mac OS X, like Google Chrome is reported to create Kernel Panic. As UNIX OS typically updates its cache after installation during shut down process, Kernel Panic usually appears at the next boot. Kernel Panic is usually easier to manage by going to safe mode and uninstalling the offending third party software or to patch it by editing the source code or in case of hardware failure, removal or replacement.

This Article Has Been Shared 204 Times!