Advertisement
You are here: Home » Copywriting and Copywriter : Economics of Writing
Advertisement

Copywriting is came from the noun copywriter, used to describe someone who writes the words for advertisements. The meaning of Copywriting got extended now from merely pointing towards the lexical meaning as defined for the word Copywriter in Cambridge UK Business Lexicon. In this article Copywriting will be taken as re-writing text of the original Copyright holder or writing a text without the claim of Copyright by the writer for the purpose of marketing any product in any form. Collins English Dictionary (Complete & Unabridged 10th Edition 2009 © William Collins Sons & Co. Ltd.) however states that the word Copywriting  took origin around the year 1910“15; as a noun from two words – copy + writer.

Digging more about Copywriting and Copywriter

We did a bit search with Copywriting and Copywriter from pre commercialization of Blogging or Internet business as a whole as it appeared to us, the meaning has changed or itself the word Copywriting was introduced with somewhat newer meaning. One article on Wordnut.com states about the word Copywriter “We can find this usage as far back as 1481.” without any reference. But there is no light thrown on the word “Copywriting”. We have to keep in mind, English is very smoothly adaptable Language and appending -ing can create a new meaning or its verb or anything. So if we take Collins English Dictionary as the reference for the word Copywriting, its origin was near 1910.

We found more on Copywriting !

As I need to use scholar.google.com, we searched there with the word Copywriting and it immediate shown lot of works published as research work long before Internet was really used for marketing purpose. We found a review of a book as  pdf format on a book on Copywriting itself, the book is The Craft of Copywriting, by Alastair Crompton, published by Hutchinson Business, 2nd Edition in 1987. This is the pdf which thrown the light on Copywriting. We did more search and it appeared Collins English Dictionary has absolutely correct (it should be, that is why its Collins) – the Word Copywriting can not date back behind 1910. Keep in mind this book, The Craft of Copywriting was first published on 1979 and also says about Advertising not other things. Its only to promote a product skillfully.

We found the slogan

As the book was difficult to trace,  scholar.google.com, shown that its not Hutchinson Business but Prentice-Hall is the Publisher with the same Author name, (ISBN 0131884093 ) but a bit modern title :

The craft of copywriting: How to write great copy that sells

So we found the book. Interesting we found many others later got inspired and selling products, books with the prototype slogan –  How to write great copy that sells.

openlibrary.org apparently last edited on Jan, 2012, not very far from the day this article is getting published : 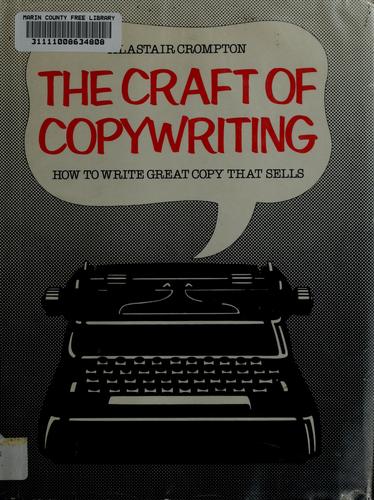 The training to become a copywriter or Copywriting is not regulated, unlike the commercial and creative professionals in the communications industry. What we found, before Internet became a good place for money, Copywriting was probably not very honorable job, Wikipedia points, some real Authors who wrote text for others became Copywriters for financial trouble. But some of the Copywriters of Advertising Agencies became famous.

Tagged With copy writer for econmics

This Article Has Been Shared 125 Times!

Articles Related to Copywriting and Copywriter : Economics of Writing