There are also other virtualization products that can exist without the host system and build directly on the hardware. Such systems are also called “bare-metal” or called “type 1 hypervisor”.

VirtualBox is comparable to a container that contains a plurality of x86 and x64 operating system instances and is capable of these at the same time to execute independently. This operating system instances are also called guest. The hard drive is maintained in separate container files and emulated. Virtual Disk Images (VDI) of Oracle VM VirtualBox is also capable of using disk images of competing products, such as VMware (*.vmdk) or Microsoft Virtual PC (*.vhd) to work. Desktop Virtualization with Oracle VirtualBox can operate on : 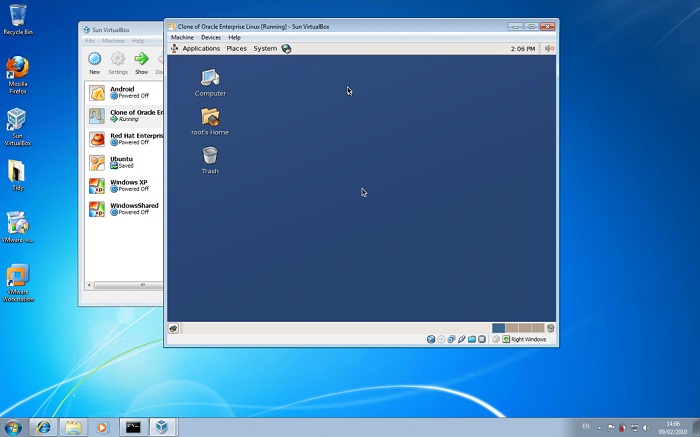 It is also possible to hold the system state of the guest system in the so called snapshots, and in case if necessary its possible to restore the previously created snapshot. The VM can also be controlled remotely via VRDE (VirtualBox Remote Desktop Extension) that supports the RDP (Remote Desktop Protocol). So that other operating systems that do not understand the RDP, can be remotely controlled.

Since version 4.0, Oracle sells a version under the GNU General Public License. This license has been published by the FSF (Free Software Foundation) and serves the licensing of free software. The offer by Oracle version is similar to the previously offered VirtualBox OSE (Open Source Edition). Additional functions, such as to be able to take the stock user application, additional software modules are integrated, which are summarized in the Oracle VM VirtualBox extension pack. This license states that the product can be installed only for private use, to test or educational purposes and used.

This Article Has Been Shared 610 Times!