Published Desktop Vs. Virtual Desktop will be compared using a cost-benefit analysis and to conclude with an analysis to investigate the results obtained. Through consolidation of virtualization and server environments, now people are looking for a way to virtualize desktops. The requirement for a virtual desktop depends on who is using or how this is to be used, due to the different approaches these points are highlighted and evaluated here in the context of desktop virtualization. There are mainly two alternatives – Published Desktop and Virtual Desktop for the sake of discussion here. What lies behind these technologies and how to run a direct comparison is within this article on Published Desktop Vs. Virtual Desktop.

Few previous articles need to to be cited within this article :

For the sake of comparison of Published Desktop Vs. Virtual Desktop, a cost-benefit analysis is carried out (in my original paper, a brief summary is provided here). This is followed by the designation and explanation of the analysis and their description. The analysis of whether or to what extent the criteria are covered by the alternatives is also discussed. In this article, two methods is compared; on one hand Published desktops and on the other virtual desktops. These are compared using a cost-benefit analysis and conclude with a sensitivity analysis to investigate the results obtained.

Definition of Cost Benefit Analysis : Cost-benefit analysis is the analysis of a set of complex alternatives with the purpose to arrange the elements of the set according to the preference(s) of the decision maker with respect to a multidimensional target system. The conclusion is drawn by specifying the utility values ??and total values ??of the alternatives. In carrying out the cost-benefit analysis there are some advantages :

The profits arising from the cost-benefit analysis has disadvantages too:

Virtual Desktop and Virtual Desktop Infrastructure (VDI) is the provision of a client operating system that is running on a physical server. The accounts of the physical workstation will be replaced by physical thin Clint on which the Virtual PC is running. Multiple virtual PCs on the server are provided for virtualization which usually operate in isolation from each other. Each user has its own virtual machine and therefore must share resources, because each desktop is entitled to a fixed number of resources, which is independent of the other VM and can not be influenced. Therefore be in Virtual Desktops – data, user settings, operating system and the desktop, that is the graphical interface which virtualizes. With virtual desktops, there is a default image that is loaded when starting a VM and then depending on the needs of the user applications are added. In the same way also the user data is provided.

Published desktop uses Microsoft Terminal Services (formerly Terminal Server) to provide a desktop interface on a server via remote access. Here this desktop is based on a single server-side operating system installation, which publishes the desktop interface in the form of a session. Any computing power needed is not dependent on the client but on the connected server. 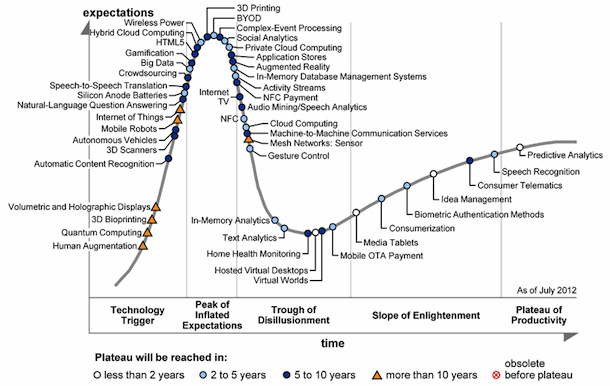 The published desktop technology has been able to prevail because of the easy to realize infrastructure. Here, however, the weaknesses is in the area of usability and networking. Note that the network load and user friendliness can be rated better with Virtual Desktop than with Published desktop. The criteria and their weighting are not to be understood as a measure, because these represent only the subjective perception of a person. Using a sensitivity analysis of the method comparison is viewed from a different standpoint.

Hosted Virtual Desktops are in the valley of disappointment. This means that the initial expectations of the product were not met at the earliest important time for the market. Generally one can say that the companies gain additional flexibility by desktop virtualization, this also results in the ability to deploy applications on the mobile devices. In addition to the flexibility, the operating costs can be reduced because the energy and maintenance costs are reduced with the use of thin clients.
Go To Top of This Article