Advertisement
You are here: Home » Benefits of Desktop Virtualization for Businesses : Manufacturer and Products
Advertisement

Benefits of Desktop Virtualization for Businesses : Overview of Software Products

Benefits of Desktop Virtualization for Businesses

XenDesktop: Comprehensive desktop virtualization and VDI.
XenApp to virtualize Windows® applications and deploy as an on-demand service.
XenClient Virtual desktops to go.
Citrix Receiver: The first self-service interface for delivering enterprise applications.
GoToMyPC: remote access to your Mac or PC – from any location.

Microsoft Corporation was founded by Bill Gates and Paul Allen founded in 1975 based at Redmond, USA. The following products are offered by Microsoft : 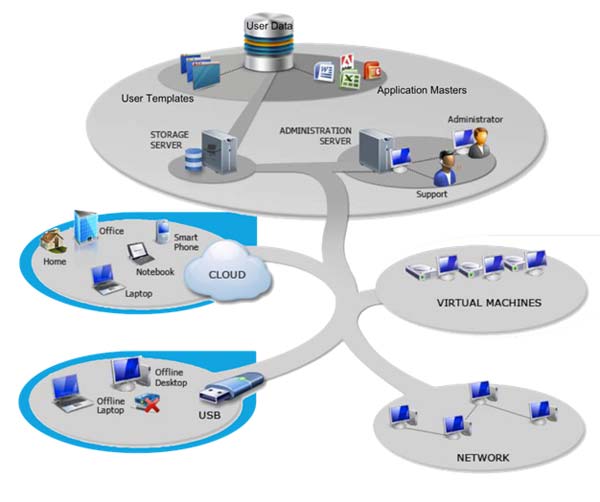 VMware, Inc. is an American software company headquartered in Palo Alto, California. Compared with the competition, VMware focused exclusively on virtualization technology. The following products are offered by the company VMware desktop virtualization :

Oracle Corporation, headquartered in Redwood Shores, USA was founded in 1977 by Lawrence Joseph Ellison, Bob Minor and Ed Oates. With the acquisition of Sun Microsystems, Oracle is now also operates in the hardware sector.
The following products are offered by the company Oracle desktop virtualization :
Virtual Desktop Infrastructure: Provides a complete solution for the management and access to virtualized desktop environments hosted in the data center.
Secure Global Desktop: Provides access to full-screen desktop environments, allowing administrators the freedom to use a single solution to provide access to server-based applications and server-hosted desktop environments.
Sun Ray Clients: Are simple, highly reliable, low-power devices that are ideal for displaying server-hosted virtual desktops.
VM VirtualBox: Is a powerful cross-platform virtualization software for x86-based Systems.

Compared to significant competition Parallels, Inc. is the youngest and with 700 employees worldwide. The software manufacturer was founded in 1999 and today headquartered in Renton, United States and is headed by Sergei Belussow and Birger Steen, serving more than 10 million end-user customers in 125 countries.The following products are offered by the company Parallels desktop virtualization :

We are not mentioning other solutions, including virtualbox, which are not intended for a typical high load server usage with more administrative features for better security. We will continue the series on Benefits of Desktop Virtualization for Businesses periodically and update, interlink the articles for better accessibility.

Tagged With BENEFITS OF VMWARE

Articles Related to Benefits of Desktop Virtualization for Businesses : Manufacturer and Products