Advertisement
You are here: Home » Benefits of Desktop Virtualization for Businesses : Part 2
Advertisement

For a quick recapitulation, Virtualization technologies are based on different layers of today’s computers. Applications use interfaces and libraries (shared libraries), which are provided by the operating system to communicate with the hardware. The user interface or UI are exclusively bound to the respective application and also via the interfaces of the operating system of the physical computer.

System without virtualization consists of :

Thus own operating system for each VM is provided, however, always the access to the actual physical hardware is controlled via the host and all the hardware access is controlled. 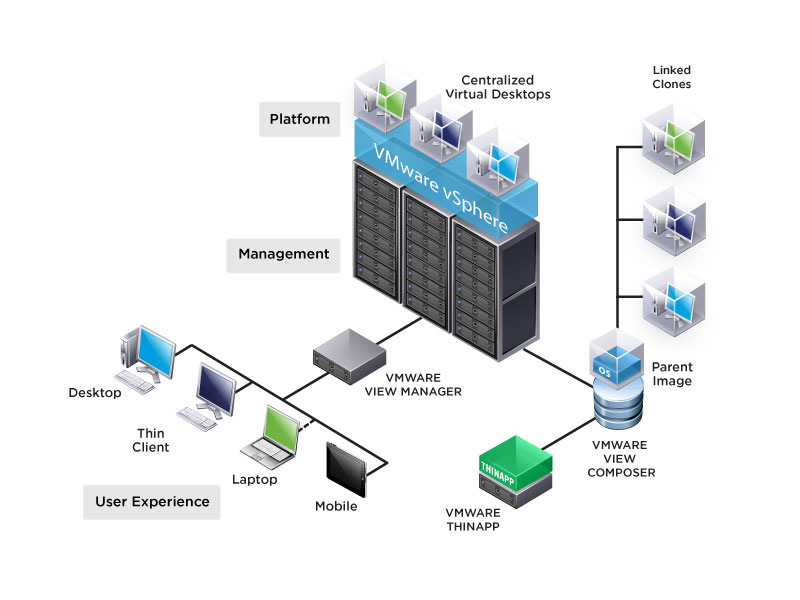 One of the biggest benefits of desktop virtualization is that, the desktops are no longer coupled to the terminals or clients. Thus, it is possible to access the same desktop or the same working environment from various clients. In traditional client / server architectures, operating systems, security software and applications are installed on each client or fat client. An employee in a company has the option to locally use the data on the server. The user can now make the decision either to store new or modified data on the server again and update or remove the changes locally and on the server.

Because of desktop virtualization, any data are already present on the server, they are processed directly, the user is principal person for the taken decision. Since the complete logic of the virtual machine is located in the data center, you now have the opportunity to work with low-performing client, which enables new options in the client deployment.

A so-called fat client is a client as we know it from the traditional workplace. So it is a full-fledged computer with its own hardware, such as hard drive, memory, graphics card and a processor. It is therefore to operate completely independently in the location by means of an operating system. It therefore has all the usual hardware components and peripheral connectors. A typical fat client is thus, for example, a Windows-based PC or a laptop.

The concept of thin clients goes back to the terminal server solution, as they have already been used in the 1950s and 1960s. At the time, resources such as processors and memory were very expensive in comparison to the offered performance. Therefore Large computers, known as mainframes, were used by multiple users at the same time. The clients were connected to their host and were used solely to transfer the entries to the host and for the representation of the output from the system.

The same concept to use today’s thin clients. Via the web as the historical model of the Terminal Server, the application data, user input as well as video and audio outputs are transferred between client and server.

Thin clients are much smaller than fat clients and usually involve no option to save data such as hard disks or optical drives. The performance of thin clients can not be compared with that of a fat client, as they have no significant computing power and processing capacity.

Articles Related to Benefits of Desktop Virtualization for Businesses : Part 2