Diskless Node or Hybrid Client is a computer without any working OS on HDD and uses operating system from server usually connected in the network for loading. Previously we discussed about Fat Client in Client Server Architecture, Thin Client and a guide on using Ubuntu with GUI on Rackspace Cloud Server as VNC Remote Desktop.

Other Operational Notes on Diskless Node 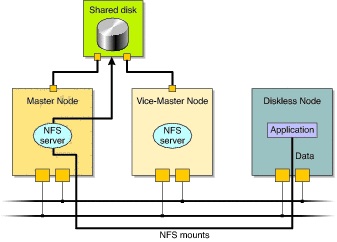 After starting the computer the Diskless Node is operated via the protocols such as DHCP. Some part of the computer’s configuration, for example, the IP address, the host name and an executable boot image is always on the disk, because there are the minimum needs. The boot image typically includes an operating system kernel and the startup kernels.

Compared to fat clients, Diskless Node helps to reduce the burden of Administration. software updates as maintaining one computer is more than enough. Software license savings are not possible if the license fee depends on the number of users, regardless of the number of installed copies. The waiver of cost of hard drives eliminates the cost for these components in the client machines, but may need more resources to be invested in the file server or network infrastructure.

It is obvious that a Diskless Node is also quieter,as  because besides the fans, the hard drives is the main cause of noise in a server computer.

This Article Has Been Shared 621 Times!