Advertisement
You are here: Home » Example of Platform as a Service in Cloud Computing : Heroku Cloud
Advertisement

Example of Platform as a Service in Cloud Computing : The Living Examples !

If you want example of Platform as a Service from the point of view – how we actually work on them, you can read or at least ‘see’ these guides :

Now compare the way of installing WordPress on a Cloud server, which is not a PaaS : Install WordPress on Rackspace Cloud Server. This comparison probably made you to understand the way we want to give you an example of Platform as a Service.

Example of Platform as a Service in Cloud Computing : Details and Criticism of Heroku Cloud 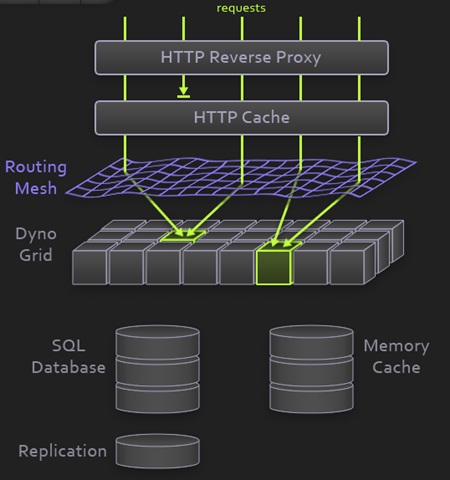 Heroku was founded by a handful of engineers who found that the development of web applications was too tedious. They made it in an way (that is the PaaS) so that, an average user can atleast use it comfortably. Facebook later introduced Heroku for Facebook that made Heroku to grab more attention it deserved.
Heroko was mentioned by many funky blogs as one of the notable Cloud Computing services. We however can not support this view. The basic reason is – Heroku itself has no physical server, it is just a deployment of a software layer over Amazon Web Services. Google App Engine is a perfect PaaS with own hardwares, internal network; Microsoft Azure Services Platform can be another example of a perfect Platform as a Service.

Heroku has support for both SQL and NoSQL datbase.

Heroku Cloud is good as long as you want it as a testing platform or to deploy a facebook App, as a server to play with codings for free of cost. It can not be a reliable PaaS as Amazon Elastic Cloud Computing is the backend – it is evident from the outage in June 2012 North American derecho which paralyzed Heroko. Moreover the pricing structure of Heroku is not hourly usage based, it is monthly based.

Although it is an Example of Platform as a Service in Cloud Computing, we suggest to use Amazon EC2 or Rackspace unmanaged servers with full root accessed in the traditional way, where the user can actually install and do anything, provision more server, load balancers, more RAM etc.

This Article Has Been Shared 813 Times!

Articles Related to Example of Platform as a Service in Cloud Computing : Heroku Cloud