Advertisement
You are here: Home » Passive Infrared Sensor or PIR and PIR Camera for Security
Advertisement

As every word in science has a specific meaning usually with a definition, Sensor inside the phrase Passive Infrared Sensor, is has quite deep meaning. It will be good if you can have the time to read (as everyone is busy nowadays, there is not much time to read anything) the previously published article on Sensor in Technology and Nature.

A passive infrared sensor is a kind of electronic sensor which uses the infrared spectrum of light, which we the human can not see with our eyes but it is always radiating from almost all objects, specially in case of specially build Passive Infrared Sensor for the Security camera, it is a device to measure qualitatively that emitted Infrared. So two words of the bigger phrase Passive Infrared Sensor are clear in front of your eyes. Now the remaining is the word passive, passive as it itself does not emit any kind of infrared, which actually deployed by other infrared sensors, for example, a car infrared sensor needs active infrared emission and measurement of the reflected rays, coming back towards it.

These PIR sensor reacts by taking the advantage of pyroelectricity of receiver surface to a temperature change, caused by a radiation flux change, primarily by the thermal radiation in the mid infrared (wavelengths around 10 microns) of humans, animals and sometimes vehicles in its vicinity. It does not respond to the static heat differences, which are caused by natural means, such as by exposure to sunlight – it can only perceive changing signals, for example when a person enters the area covered by Passive Infrared Sensor Camera. 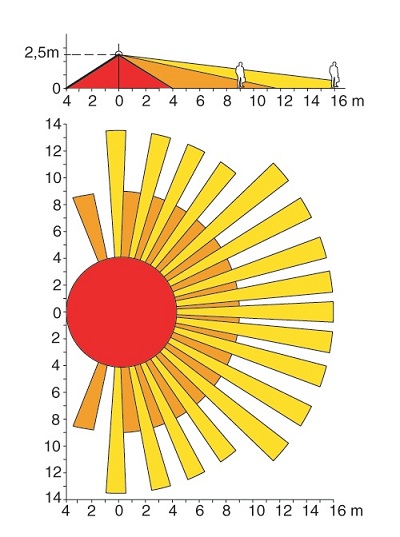 Prior to the actual Passive Infrared Sensor, think like a digital camera’s sensor, within the focal distance, a spherical or cylindrical convex dome of small convex lenses usually build from translucent whitish plastic, which is clear to the infrared sensor, is placed. This multiple lens collects infrared light from a corresponding plurality of discrete sectors on the direction of the small sensor surface. Visible light is more scattered back because of that translucent plastic. The sensor ‘looks’ through vertical blind slots or the grid of a perforated plate. Now, when some thing moves with a surface temperature sufficiently higher than the background across this whole thing, the ‘warmth’ spread by that moving thing (obviously it is an animal or human) as infrared radiation. This is the basic about how a typical Passive Infrared Sensor works and the total thing explains, just a small circuit will make it working. This is the reason, they cost quite lower. The above diagram of Passive Infrared Sensor action shows the typical covered area by a Passive Infrared Sensor. In other words, for a full setup, these Passive Infrared Sensor needs to be placed in an organized manner with an overlap within 8 meters of another at least two Passive Infrared Sensor units. The whole data would be calculated by a program. That is actually a fool proof enterprise level setup. So your low cost Passive Infrared Sensor is becoming costly as multiple units are needed, a special team is needed to install them rightly and a person will be needed to monitor the program.

PIR Camera for Security is widely used and practically Ebay sellers made it very popular ! The basic usage of Passive Infrared Sensor is, probably you have done it as DIY project – light switch.  PIR Camera for Security alone is actually not very sensitive and theoretically for a 3 tier system (cover area from entrance point will be 3 x 8 meters = 24 meters) is never sensitive enough to get protected from a real dangerous gunman ! For a 3 tier system at least 27 units will be required thats too with the risk, that a gunman will shoot from 25 meter distance. A .22 caliber small bore Long Rifle can shoot effectively to 50 meters.

So one PIR Camera for Security, alone can do very less, that is why their effective usage is limited on remote entrance, elevator entrance etc. Passive Infrared Sensor based security cameras has another big disadvantage – it can not record a video itself to recognize who actually entered, in real time or as record as video footage.

This Article Has Been Shared 912 Times!