Run WhatsApp on Windows PC or Apple Mac : What You Actually Need

If you read our article, details of WhatsApp and Extra Addons, you will understand there are quite high level difficulties to actually simulate to run WhatsApp on Windows PC or Apple Mac, if the ISP and Country is quite aware of the users’ security. If the security is breeched, US or India can be blown by those terrorists, as they will enjoy to use almost free (free for 1st year, $1 per year subsequently). Most dangerously, a rented server could have been used to fool. So, the basic thing is – we need to run WhatsApp on Windows PC or Apple Mac in some legit way so the gateways will not prevent either the protocol by the computer by Firewall or by the ISP.

First the device for connection should be an prototype USB modem which actually supports SMS and optionally Voice Call (in case SMS fails) with a SIM Card from your ISP with 3G which uses a VPN, support for Voice and SMS facility. So technically the ideal USIM (Universal SIM) to Run WhatsApp on Windows PC or Apple Mac should be of an Android Device which actually supports these features but not never has been activated for WhatsApp. People fails first due to this proper hardware and ISP setup, plus Operating System level Firewall blocks sending SMS thinking the work is done by a keylogger.

It is moron’s thought to get a SMS over a leased line, how much you pay does not matter. Without these basics, no one in this World can get rid of the error in verification process to run WhatsApp on Windows PC or Apple Mac. With the proper setup if you are unable to carry out, the Firewall is preventing to allow the App which is simulating, or WhatsApp itself or natively has blocked the port. Android is actually configured like a server on VPN. This will give you the lead, how technically difficult can be the process to solve errors to run WhatsApp on Windows PC or Apple Mac.

In one sentence – your USB Modem should hardware wise emulate as a verified Android.

The software part is quite easy to setup. We previously described how to run Android Apps on Windows 7 with BlueStacks App Player, install it. That is a Free Software and works both for Windows and Mac. With proper SIM card, you will be able to see your installed Apps on that Android device in Marketplace / Google Play through the App. Just search for Whats App : 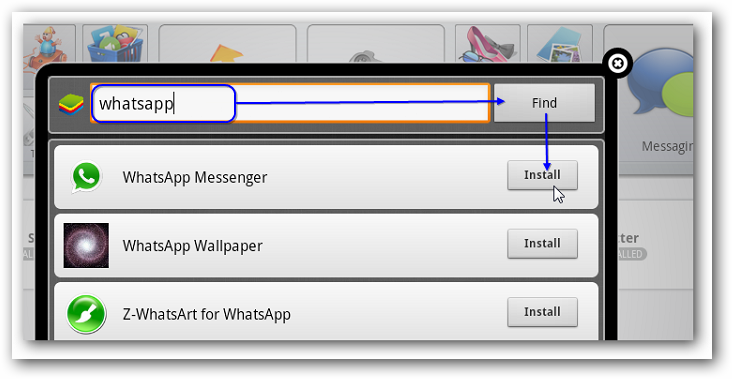 This first step if fails there is no way to run WhatsApp on Windows PC or Apple Mac with your setup. Normally it get installed like Android :

If this step fails, you are rejected by Google’s checking, it can not fail with proper setup described above. Now WhatsApp should be able to send SMS, if you do not get SMS in order to verify and Run WhatsApp on Windows PC or Apple Mac, these are ways :

This Article Has Been Shared 718 Times!