Time Sharing refers to the method of allowing a large number of users using one computer to share its computing resource by multitasking. Time Sharing got popularity in the decade of 1970 because it made the carrying cost of computing lower and the computing experience went much more interactive.  Time Sharing also synonymously used as  Time-Sharing (a dash between, Not to be confused with Hyphen, in that era using Dash was common.). With time the dash has disappeared and became Time Sharing, sometimes also joined as Timesharing to make it a single word.

What is Time Sharing in Computing

In 60’s and 70’s the computers were basically slow and buying a computer was like buying a high end model of Audi or BMW now as simply there was no microcomputer or minicomputer. Otherwise the cost of computer was equal to today’s full fledged mainframe computers. We wrote about these points on the article on Workstation. Usually programs introduced in batch systems, using punch cards. These programs usually took hours to weeks to complete the job and output was pathetically printed print outs. Batch processing systems were introduced to add the buffer to increase the speed. Practically it is difficult to feel the situation if you have not seen, it can be compared with going to a lathe workshop for a complex mod of an iron piece and going to office and during return from the office, take the delivery and pay. Just like buying a lathe today for home is an abnormal thought, computer was like that. So actually there was no developer-computer interaction. Time Sharing basically allowed to use the computer by the developer as one costly computer could be used by multiple users at the same time. Except for historical reasons, there is no actual need to know how the time sharing technology was used, because everything has been changed after the 80’s. 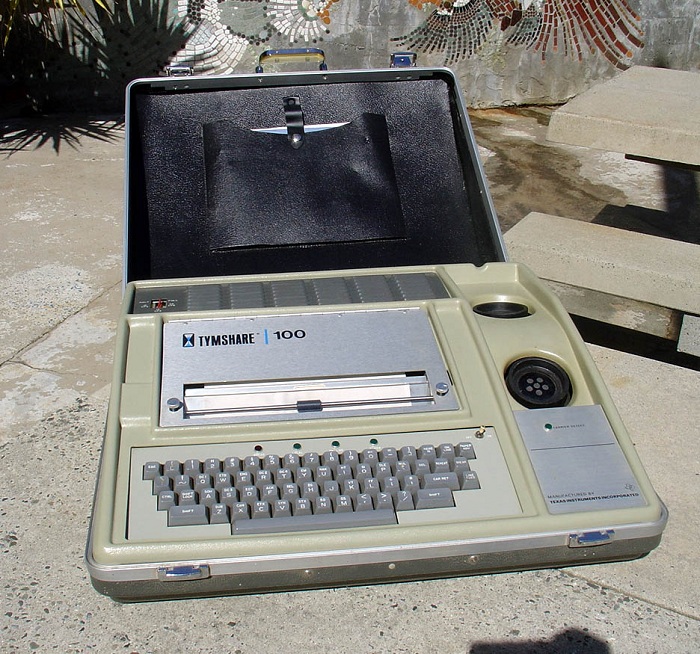 Image : Silent 700 from Dave’s (drinnan.com) collection. It was the first effective truly mobile computing device to connect with a mainframe using a telephone and with working speed of 300 bps, fastest at that time. Output was via printout.

Technology changed, but the word remained as Time Sharing, pointing towards the meaning to allow a large number of users using one computer to share its computing resource by multitasking. Basically the ideal Time Sharing equivalent of today’s computing is Multiseat Configuration. Virtualization and Cloud Computing is a kind of new generation Time Sharing. The target is the same – to reduce the cost of computing and making it affordable to everyone. Today we are comparing 70’s computing with lathe machine, who knows after 50 years people will compare today’s virtualized data center in the same way with a set top box sized data center setup inside the bedroom. The word Time Sharing will remain as a hallmark for making computing for everyone.

This Article Has Been Shared 339 Times!