Twitter Cards is a newly introduced meta name system for webmasters and authors, a new head tag to increase your headache and this guide will act as painkiller. As you can understand, Google has added and researching so much and getting attention for schema.org things, Facebook uses Open Graph Protocol to verify, so it is a prestige issue for Twitter. If they can not increase a bit headache to the site owners, then what is ‘social value’ ? Ultimately we have to use Twitter Cards, either you love or hate the pain, simply because it will probably add some extra on SERP as well.

Google is doing the right. There is real need for implementation of schema.org tags. But basically Twitter is doing as a competition with Google Plus. It is evident from still buggy checking tool, acceptance of existing Facebook’s used Open Graph Protocol, lack of sound documentation etc. You will get documentation on Twitter Cards here :

After introduction of Twitter Cards, Twitter API is frequently shutting down (you can search with widget tweet loading problem) probably due to TwitterBot is running on the same server. Twitter is well known for such API downtime. That Documentation can make any WordPress user confused, so we adapted the simplified idea by Joost (http://yoast.com/twitter-cards/) and made it more simple.

The testing when we are writing, does not worked. We tested with Joost’s website and our 7 domains. But the method is solid, it will work (logically) later. There are few instances of situations, use which is easiest for you.

If you already have Open Graph Protocol  for Facebook, you can simply use the any existing plugin to add these Meta data inside your head (your website’s header div) :

Obviously, twitter:site will be equal to twitter:creator if there is only one Twitter account. The existing Open Graph Protocol for Facebook will work fine for the rest. 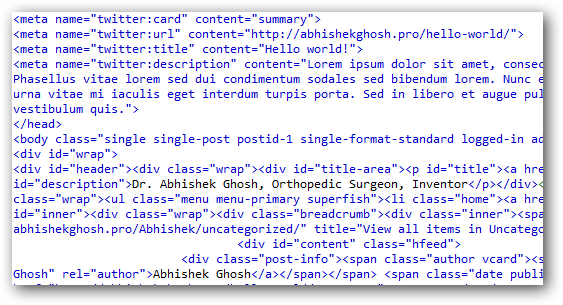 If you love to have only Twitter Cards as a separate plugin, then use Twitter Cards Plugin from WordPress. We hope that Pinterest, StumbleUpon, Digg, Delicious will not ‘discover’ separate tags. Following schema.org would have been the best for all, just a simple one meta could do the purpose. But as we said – it is a prestige issue – your all neighbors are buying Luxury Sedan, at least you should paint your house. By the apply using that form on Twitter on the above mentioned URL. We can not give any warranty, because it is not Google that has excellent crawlers.