Advertisement
You are here: Home » Adding a Cloud Based Version Control System to WordPress
Advertisement

Adding a Cloud Based Version Control System to WordPress : The Problems

The problems of adding a Cloud Based Version Control System to WordPress can be described point wise :

Adding a Cloud Based Version Control System to WordPress : Guide to Build your own

As frankly I understood after researching the thing for quite big time framework, it is difficult to make you understand in few minutes; still the most cost effective, most customized, most headache free, almost ready made method is described for adding a Cloud Based Version Control System to WordPress. First, for the repository part, you can use Heroku Cloud as you will get a SSL for free. Whether you actually have root access on your main WordPress website or not, it will not matter at all.

First create a sub domain and point it to Heroku Cloud’s that instance. It is nothing but a normal subversion (SVN) just like actually WordPress.org uses :

Now look at the public (= most commonly used) webpage of the same Plugin :

Basically that subfolder ; that is /plugins/ is nothing but a custom separate WordPress with bbPress Installation with lot of modifications. Now you have actually understood, that plugin page is nothing but a bbPress custom landing page : 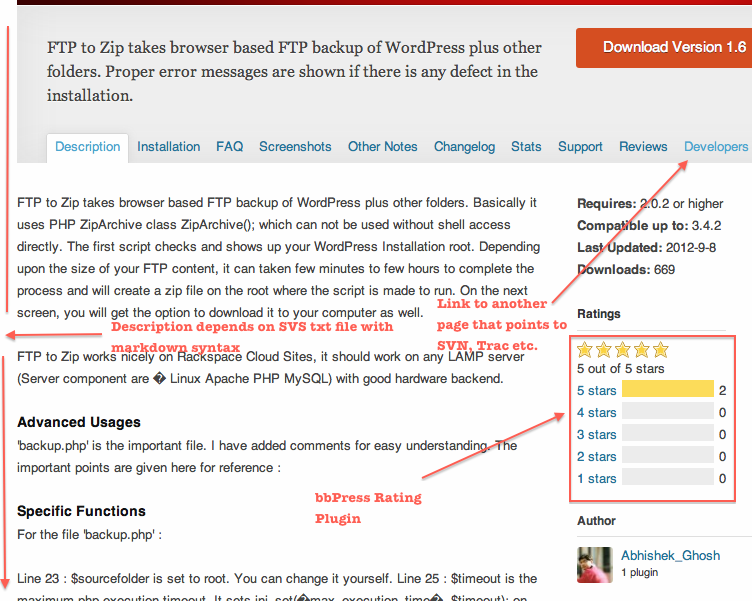 Now you are thinking, what you will do with a SVN on hand and a bbPress. The answer is a Plugin :

If you are thinking that bbPress is very basic forum software, you are fully wrong. bbPress is used by WordPress.org as well as many third parties like Dropbox, it can effectively handle high load of traffic which many paid forum softwares will fail. The reason is, bbPress can easily be made scalable with multiple scalable database, just like WordPress. The difference with WordPress with bbPress is – the number of developers of bbPress is less than WordPress. Yes, microformats, rel tags etc. can be added too, that is one of the reason of having higher SERP of the WordPress Plugin pages.

This Article Has Been Shared 431 Times!

Cite this article as: Abhishek Ghosh, "Adding a Cloud Based Version Control System to WordPress," in The Customize Windows, December 15, 2012, May 14, 2021, https://thecustomizewindows.com/2012/12/adding-a-cloud-based-version-control-system-to-wordpress/.
Source:The Customize Windows, JiMA.in