FreeBSD 10, the GPL-free upcoming version of the Unix-based distribution will have own Hypervisor named bhyve. bhyve is already officially available for usage. The FreeBSD team working on its own hypervisor, which should come in the next version 10.0 of the Unix-based distribution is deployed. Bhyve is a type 2 hypervisor that runs only on FreeBSD. As a guest can use previously installed FreeBSD version 8.3 upwards. FreeBSD 9.1-RELEASE is the official release for public usage at time of writing this article.

bhyve, the unique hypervisor for FreeBSD 10 can be found here :

The project is Bhyve it already since 2011. Meanwhile, it is considered mature enough that it can be officially integrated into the upcoming FreeBSD 10.0. The hypervisor is present only on Intel’s VT-x technology, support for AMD SVM is still pending. Bhyve uses features such as virtIO or from Intel is called Extended Page Tables management for memory addresses of virtual machines.

Bhyve consists of a kernel module and the library named vmm.ko, libvmmapi and application bhyve, bhyveload and byhvectrl. Total the Bhyve components will use about 250 KB of memory. Bhyve for FreeBSD 10 is created by using LLVM and Clang, which will basically be a requirement of all applications for FreeBSD 10.0.

The easiest way to try using bhyve is with a FreeBSD 10-CURRENT iso snapshot (January 20th, 2013) or later for the host and the vmrun.sh launch script to install and manage guests. Any recent FreeBSD 8.3-STABLE, 9.0-STABLE, 9.1-STABLE or 10-CURRENT install.iso snapshot should include the necessary VirtIO drivers for bhyve. 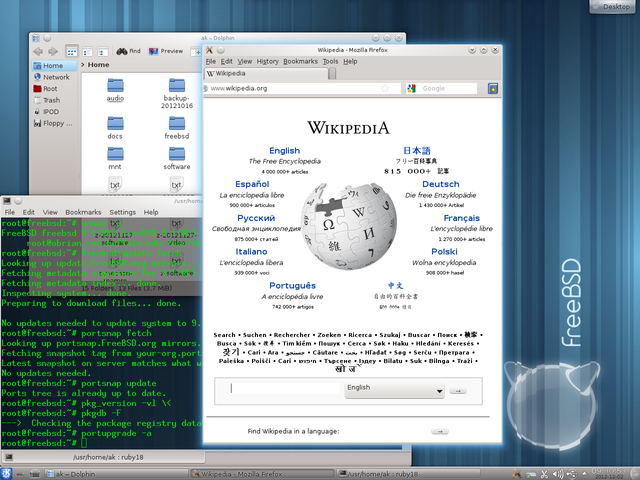 FreeBSD is always considered as a reference Unix like OS for its stability. Apple takes the security components from FreeBSD community. Own version of Hypervisor definitely can make more suitable for server based works.

This Article Has Been Shared 211 Times!

Articles Related to FreeBSD 10 and Own Hypervisor bhyve