Play Games in Terminal the old good GNU emacs games in Mac OS X using some commands. Many games comes by default in Lion or higher like Tetris. You can add more emacs games for free of cost. We are showing the example with OS X 10.8.x. It is a nice feature and mostly unknown that these games exists in your Mac.

Practically there is no minimum need to Play Games in Terminal. You can use the default Terminal application by going to :

Click Finder Icon on Dock > Click Applications > Double Click to Open Utilities > Double Click the Terminal to launch the application. We are using iTerm2 which you can also use if you follow this guide; iTerm2 looks better than the default Terminal. You need a basic idea about UNIX commands, you can follow this guide for some idea. For iTerm, the shell is zsh, by default it is bash. It does not matter which shell you are using.

Steps To Play Games in Terminal in Mac

So, you are ready with your iTerm2 or Terminal to Play Games in Terminal. In our case, emacs is of version 22.1 ; you can see the version if you change directory to emacs :

You can get the list of games by running this command or change directory from the above place :

OS X is practically UNIX, so there are lot of such funs. You can play games in two ways : first by typing emacs and hitting Enter/Return key, for the games, press [Esc] key then X from keyboard and type the name of the game you will play, before pressing Enter/Return key. Or, you can directly play the game by using this command (example is with Tetris) : 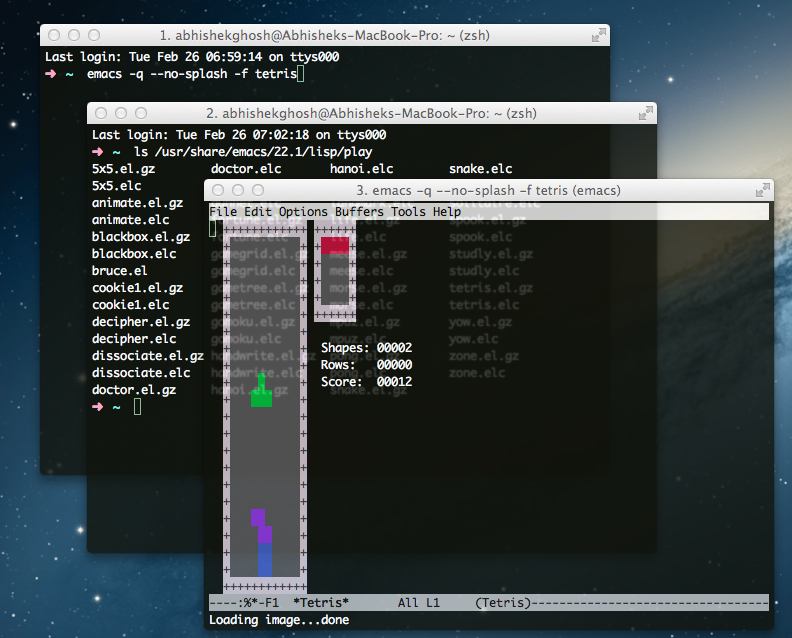 Game control is with Arrow Keys.
For example, you went Mad and want to play with your Doctor :

Or our Nokia’s Snake :