Advertisement
You are here: Home » Google April Fools with a Bunch of Pranks
Advertisement

Google April Fools with a Bunch of Pranks this year and involves kind of easter eggs in their most serious products like every year, here is our analysis. Google does these April Fool works with definite meaning and indication of their strategies that will be adapted in future or the users’ behavior which as a data may be hilarious.

Google is a brand, that is directly related to serious, real life responsibilities. If Google Web Search get hacked for a moment by a secret group of hackers, humanity can be exploited by showing falsified news. Have you ever thought in this way ?

Possibly the first among the bunch of Google April Fools for 2013 was the YouTube Video, where a Google employee writes about the closing of YouTube. This was followed by an excellent idea – Introducing the capability to get emotions in Google+ Photos.

The third point was probably all the webmasters and search engine experts were looking for – declaration of some new ‘revolutionary feature’ with extreme sarcastic way to point out something. Thus we got Google Nose.

There were actually more Google April Fools prank (still working now, at the time of writing), from Google Analytics, News, Maps. Notably, this year; Google’s each team except few important ‘too serious to joke’ departments added a newer thought. There are news style websites, you can read the details on their websites written by hired ten dollar writers. We are more interested in dissection and analysis of these Funny things presented as Google April Fools’ prank for 2013. 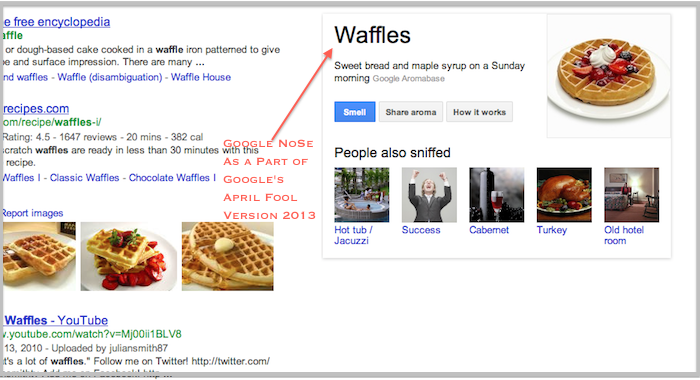 It is apparent from Google’s way of presentation – YouTube is quite important now for commercial blogs and product selling websites. We saw in AdWords how many new features has been added in 2013. Even one can target a viewer to kind of forcefully show their part of video, obviously with option to skip. People watches video more than before. It also points towards professional grade YouTube video creation, the proper way of presentation.

Google Nose probably point towards some newer strategies for Google Image Search. Google Image Search is still the field, where actually the old way of SEO works. Definitely the Microtags are important, but still the title, image ALT and description works. Do not forget; Google Image Search now never shows a wrong person’s image while searching for an important person, this is apparent since Google Plus has been made public.

Others can be easily interpreted by any user who understands the Basic Way of Thought of Google Inc. The remaining things points :

We will be publishing an video soon featuring the oddies. Still then enjoy Google Nose in real :

This Article Has Been Shared 968 Times!

Articles Related to Google April Fools with a Bunch of Pranks