Xen Switches to Linux Foundation, an agency that will ensure greater development for the project, now away from Citrix including Virtualization software. Xen is a hypervisor project, which is a software that allows to run multiple virtual machines on one physical computer. It originated in University of Cambridge and was under the U.S. company Citrix Systems.

Being away from Citrix, the company which has controlled the development up to date and in fact this has limited the power of action even outside companies like Amazon or Samsung, interested in continuing the development of the open source project because Xen is strongly present in their infrastructure. Inside the Linux Foundation there are the biggest IT giants of the world, each of them will put $ 25,000 yearly funding to carry forward the development of the project, with more choices and more balanced share by individual members : Xen hypervisor remains one of the most widely used production, considering that Amazon Web Services uses Xen for its EC2 service, as well as Google does for many services. With the growth of projects like OpenStack this software may not have a further expansion, alongside KVM that is increasingly being considered as a virtualization engine, even for cloud computing infrastructures.

Now it can be expected to greatly accelerate its development to the detriment of other competitors like Microsoft or VMware, all interested in expanding into the world of cloud computing. 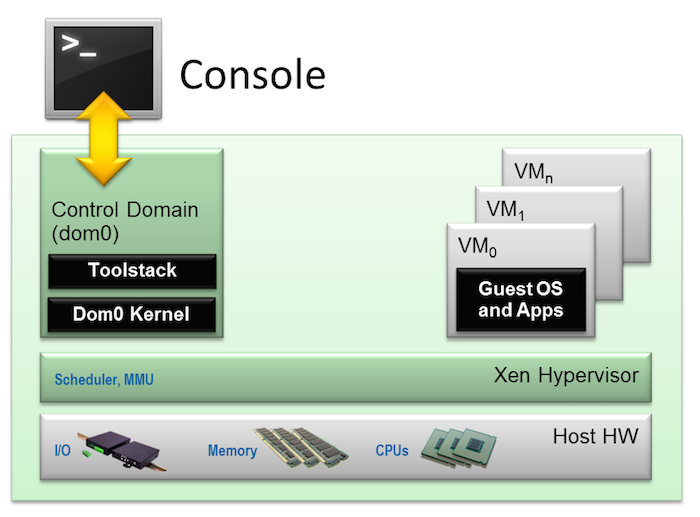 Xen is a hypervisor which runs directly on a hardware. Xen can support multiple operating systems on virtual machines. In principle, the approach is similar to virtual memory and processes : The virtual memory, each process (in this case the virtual system) use the memory as if it were the only process that is executed by the operating system. More specifically, the hypervisor assigns the virtual system to all parts of the main memory. These appear to the system as a contiguous virtual address space, such as the physical one not virtual memory system appears. It can be used by the virtual machine accordingly and exclusively.