The byte stream input/output (I/O) model created by UNIX OS and later adopted by other operating system is another classical example of usage of Abstraction Layer. In UNIX OS, that is your OS X Mavericks now for practical example, most types of input and output operations are considered to be like streams of bytes to be read from a device or to be written to a device. This stream of bytes model is used for file I/O, socket I/O and terminal I/O in order to provide device independence. As Terminal itself went obsolete,  Terminal emulation is actually done now.

In computing, a level of abstraction is a generalization of a model or an algorithm which is completely independent of any specific implementation. These generalizations arise from similarities that are well encapsulated by models that express similarities present in various specific implementations. The simplification is/are provided by a good layer of abstraction which allows easy reuse and acts as an barrier to be abused. 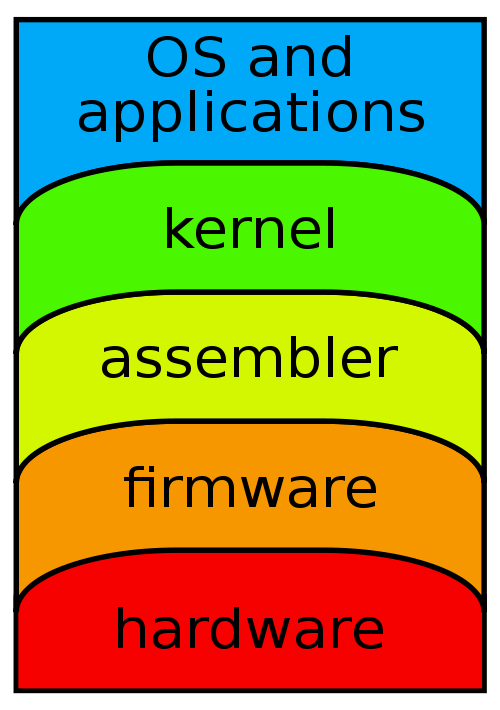 In the above image, we have shown some terminologies, which basically can be searched on this website for more details. A typical computer user is only aware of the Application plus OS and the Hardware. The in between layers, which a general, an average user can not see (but can be made ‘visible’ in other ways) but are present. All of them are separated by Abstraction Layer. Hardware abstraction Layers (HAL) are sets of routines in software that emulate some platform-specific details, they give the programs a direct access to the hardware. There can be different types of Abstraction Layers like API level abstraction, Database Obstruction and so on.

In order eat the chocolate, you need to first tear the wrapper, then the foil and then the real chocolate is…no! You need to open your lips, make the jaws, tongue properly aligned…after eating the chocolate (do not eat the whole bar), again you put the abstraction layers in proper places – can you eat a chocolate with the wrapper? To protect the half eaten chocolate, usually you add some ‘security’ to control the access! That is the ‘API level abstraction’. That foil has some function, it not only decorates the chocolate – this is ‘Kernel’. If the foil gets torn during packaging, the chocolate will be ‘hacked’ by weather, ants.

Articles Related to What is Abstraction Layer?