Forced Perspective is a visual process for artificially give a sense of depth or to simulate different sizes of objects or people involved in the same scene. Appeared in films since 1910, forced perspective has been widely used in the 1950s and 1960s, particularly in low-budget films. It is still found in current production, because it is a fairly inexpensive and very effective technique, provided Forced Perspective is well controlled.

In the studio, to amplify the depth of a scene, we extend the first elements of decor by smaller objects or models. If the camera is placed, an illusion of distance from the background is obtained. It is also possible to exaggerate the size of the first elements of decor. To make things appear larger than each of the other characters, a similar technique is used but with the opposite effect : the character that you want will just shrink away from the camera. For the system to work, it is natural that other visual references coincides. Thus, the elements of distant scenery surrounding the character will be proportionally larger to give the illusion. It will also connect seamlessly with those in the foreground.

There must be intense lighting (due to the small size of the diaphragm to increase the depth of field) and identical in all respects. Rotating the camera is possible around the nodal point – panning. 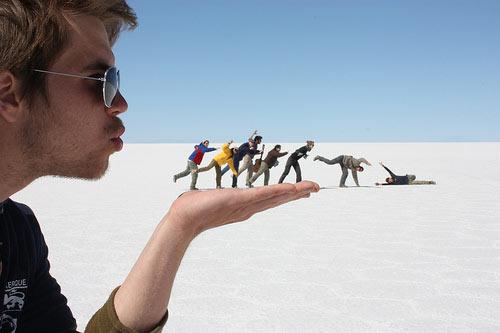 These are various constraints that forced perspective is more easily used in a fixed camera. Indeed, when traveling, it is difficult to adjust the visual cues that form the perspective simultaneously. Nevertheless, this method exists, then we can talk about forced perspective animated, a recent example can be from the filming of The Lord of the Rings: The Fellowship of the Ring.

If we wanted to film two people behind a table, one appear larger than the other, while changing the viewing angle. It uses a traveling side to move the camera, and simultaneously, the seat on which sits the character in the background slides in the opposite direction on another track traveling. It is not possible to manually synchronize the movements, both movements are also being managed by computer with servo motors. Note that, it is impossible to use the stereo with this technique.