New Relic can be installed on Heroku Cloud in easier way just from the web UI front end without any need of using Command Line Interface. Here is how. Actually the method we described in the older guide on Installing New Relic on Heroku Cloud is currently the standard method for WordPress-PHP-Unknown-Heroku-Things like situations, what the sentence or rather paragraph we missed to mention there is the alternative easy way. For not mentioning it (has been added now as one sentence), we got another email, because for other non-WordPress, non-PHP Apps, possibly the round about way fails.

Notes on Installing New Relic on Heroku Cloud (Except PHP)

Obviously, if the thing is a PHP instance, we are basically forced to use that odd round about way, for other things which are officially supported by Heroku, why we will use a roundabout way. Yes, for PHP App Instances you will also get the list in the below described method. But actually it will fail. So, until and unless you/we are able to run New Relic directly for PHP Apps which needs other components to be installed (like PHP Zlib), we have no other shortcut.

Easier way is more easier than you can think of. Navigate to to this webpage (while logged in to Heroku Cloud) :

I think, it is easier to follow the screenshot than reading a bland description. I think, it is not possible to describe easily : 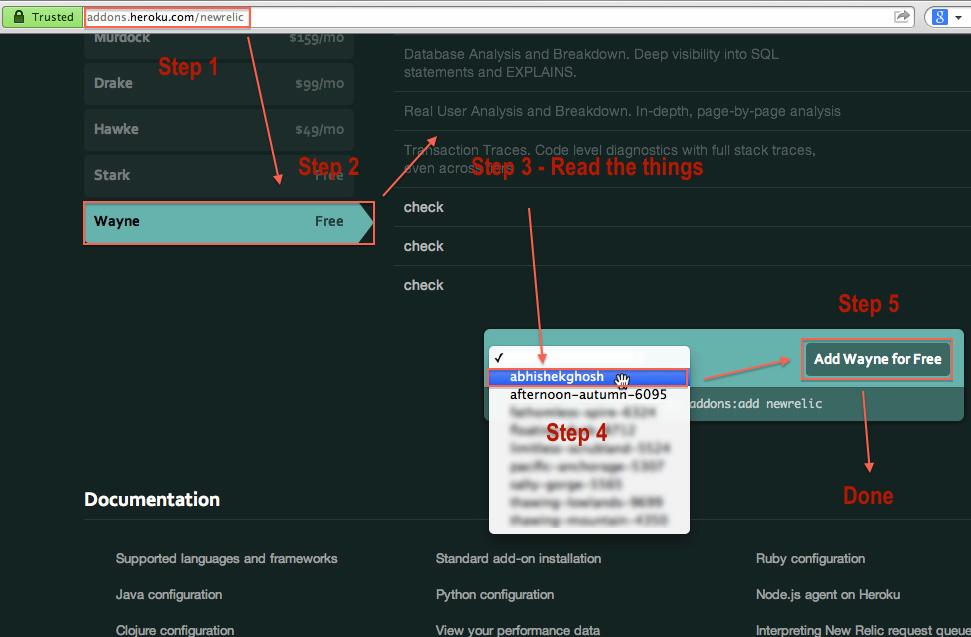 So, if you right click on the image and open it in new Window, the image will get bigger. You can zoom to 100% to see the things clearly. 5 Steps, very easy to perform.