Advertisement
You are here: Home » What is Wheel Group in UNIX and Unix-Like OS?
Advertisement

Wheel Group originated in the TENEX OS, distributed, widely used in 1960s. Wheel Group has wheel account, has additional system privileges. UNIX Operating System and Unix-Like Operating Systems including (not all) GNU Linux, there are some differences. It must be noted that; GNU su' does not support the wheel’ group. This is official text :

Basics on Wheel Group in UNIX and Unix-Like OS

Because of the migration of system developers TENEX/TOPS-20 Unix , the term was adopted by the Unix community. In several of these systems the command “su”can be used to gain the root access. Anticipating misuse, some system administrators only allow access the command by certain groups, often identified as wheel, indicating a higher level of confidence. In a GNU Linux is not necessary that a user is in the wheel group to use the su command, this is mainly for philosophical reasons.

Modern Unix implementations generally include a security protocol that requires a user be a member of the wheel user privileges group in order to gain superuser access to a machine by using the su command. When a server had to be maintained at a higher level than the day-to-day system administration, root rights were often required. The Wheel Group was used to create a pool of user accounts that were allowed to get that level of access to the server.

To check yourself on OS X 10.9, open the group file in nano text editor :

This is the screenshot : 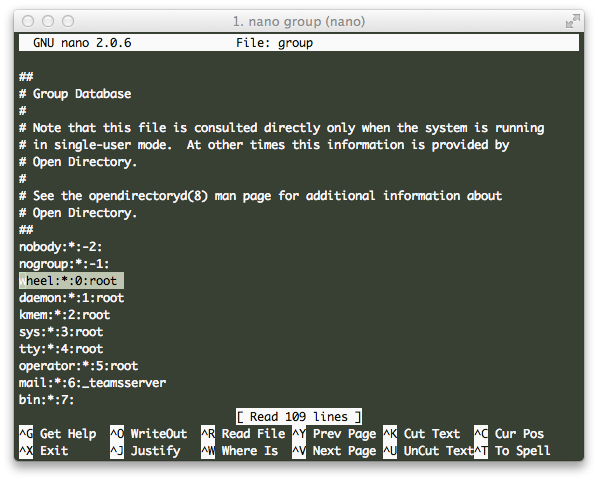 For Linux : Most GNU Linux systems, come without wheel groups configured and implemented. However, a wheel group implementation requires no special effort. The basic set up, as it was in the beginning. Create a wheel group in /etc/groups or /etc/groups. Change the permissions of the su command so that only those in the wheel group may run it.
You can add yourself to wheel when creating your account using vigr or nano or vi to edit the file /etc/group; add your username to the end of the line starting with wheel :

visudo allows you to tailor the /etc/sudoers file which determines who may run what commands using sudo. On UNIX the same file can be edited using :

Another interesting file on GNU Linux is :

Can be opened with :

For not being member of wheel implies that one will not be able to use su to get a root access. A sample suauth file is :

The same kind of file exists on UNIX (BSD variants and OS X) as /etc/pam.d/su.

DO NOT Edit any file without knowing theory in details. Wrong editing can result in buffer overflow/buffer overrun.

This Article Has Been Shared 918 Times!

Articles Related to What is Wheel Group in UNIX and Unix-Like OS?