Hashtag in Facebook Has Many Functions Which Are Usually Unknown. Here is detailed guide on using Hashtag on Facebook by any level of user. Previously, we discussed about the basics of Hashtag in our article – All About Hashtag and Tools for the Advanced Users. There is Hashtag Counter API by Facebook. This API is restricted to the partners in the Public Content Solutions program. We have three more interesting article in this context, First is written in quite old article –Integrate the system of Twitter hashtags in WordPress posts, Second is not one but two, which intended for those who do not understand API – REST API or Representational State Transfer API, API Explained in Plain English and Third is the tool to test API – CocoaRestClient.

By using strategic hashtags in your public Facebook posts (profile and page), everyone will be able to see your hashtags as clickable links :

As you can see this is like a category page in WordPress, hashtag on Facebook has its own unique URL with a status update box at the top. It is possible to get some conversation if used with Feeds. n June 2013, Facebook made hashtags clickable in status updates published from both personal profiles and brand Pages. It also made them searchable so members can bring up a stream of mentions :

As Facebook ships it as public feature, it by no means forces you to choose between the social network and Twitter. Both platforms can be used concurrently, and often it is recommended that you support your presence on one social network through another : 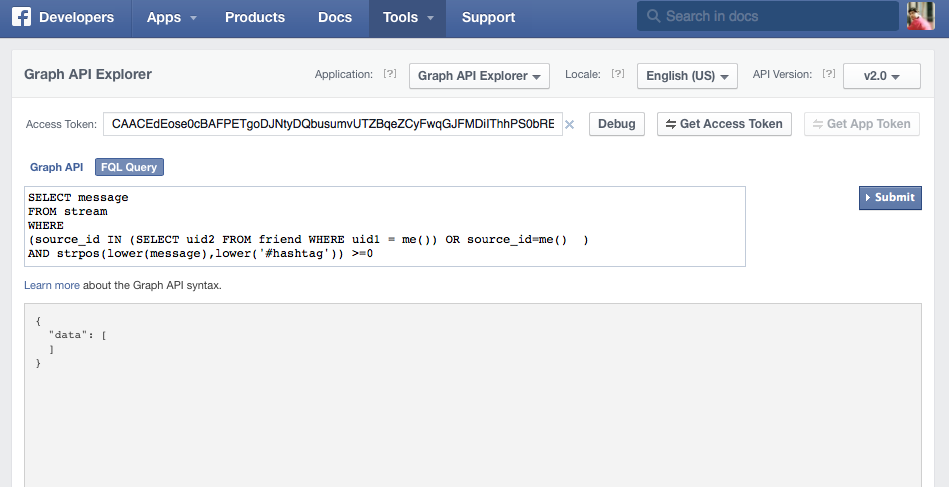 Access to the Keyword Insights API is restricted to a limited set of media publishers and usage requires prior approval by Facebook. You cannot apply to use the API at this time :

However, there is another feature named Interests :

So, basically you can create your own public list :

This is wrong/outdated usage now :

I used this FQL Query :

However, it does not work. If you find some way, let us know.

This Article Has Been Shared 718 Times!