Since SVG is a XML-based file format, contents of SVG files are for computer assisted translation and other further procession. We can also directly use a text editor to edit. However, it is easier to edit with special softwares. The recommended file extension is .svg or if the file is gzip compressed; .svgz. The MIME type is image/svg+xml. In September 2001, W3C published Scalable Vector Graphics (SVG) 1.0 Specification as the first recommendation. This recommendation was supported by parts of the IT -Industry accepted as standard. Currently, the specification of version 1.2, at the time of publication of this article. Through the use of profiles and low-power devices is possible to work with standards-compliant SVG files.

SVG XML document is arranged in a tree structure with different elements and these elements has assigned attributes. Each SVG file begins, as common with XML-based language, with the XML declaration and the document type declaration, which used in the name space description. Given to the latter a reference to the corresponding DTD file is inserted. Here is an example :

In contrast to the integer pixel coordinates in raster graphics, (eg. as JPEG , PNG , BMP ) SVG coordinate floating points. Pixel data in raster graphics, however, have limit ion by resolution, they are limited in their range of values ‹‹to whole numbers as well as the dimensions of the image – according to the nature of the pixels. In grid-based output media – for example, a monitor – a SVG specification as (x = 100, y = 200) denotes not the whole screen, but the top-left corner (or one of the other corners of the corresponding neighbor pixels). Assuming in this example is that the scale of the SVG document is appropriately chosen. SVG supports three fundamentally different types of elements: 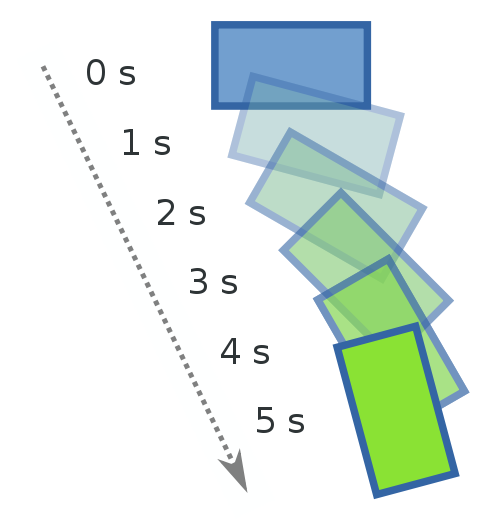 Analog DHTML SVG can be made ‹‹dynamically using DOM scripting. Here the Document Object Model of SVG (SVG-DOM) and can be manipulated, for example, new elements can be generated and inserted or changed in size and shape. SVG can be interactions as user input such as mouse clicks and movements or can be completely algorithmically generated. This can be used in web applications use like in diagrams in Google Docs or mapping application.

For manipulating SVG, the SVG standard SVG DOM is used. It extends all types of standard XML DOM through SVG-specific data types and functions, such as for graphical transformations ( Affine mappings ). This interface is standardized for different programming languages ‹‹(for standardized JavaScript, Java, Perl and Python). In web browsers JavaScript is used for DOM manipulation.

As a SVG file internally a DOM tree which this can be achieved by existing browser technologies, such as ECMAScript and CSS, thus an animated image can be generated. he developers of Webkit have a draft for CSS animations developed in the in the official CSS3 standard W3C.
Through XML multimedia standard Synchronized Multimedia Integration Language (SMIL) andy also the XML elements, animations can be expressed. States, which can be animated are transformation, position, visibility, color and size. Important for the understanding of animation, the terms ” actor “(the object to be animated) and” script “(the time span of the animation).

For the most, Animation Tag is a mandatory attribute which is required, it determines the type of animation. Other basic components are the time frame during states of animation (optional), the state after the animation, and whether the animation should be repeated after completion. Events are made ‹‹click dependent as mouse or touch.

Programs that SVG files can be created and edited, include:

Scalable Vector Graphics (SVG) and Base64

Base64 Encoding can be also used as inline with SVG :