Advertisement
You are here: Home » DNS Records and Analysis of How a Domain is Routed
Advertisement

With One Domain Name, There Can Be Many Associated Protocols. How These Records are Routed, Resolved and Peering Happening Can Be Analyzed. Normally, we only analyze certain parameters, but from a broader aspect, Internet Exchange Points (IXPs), Peering – all play a big role for resolving a domain. The control over the router on Ingress and Egress Policies can give many details. Root Servers/Domain Root Servers plays a big role. ICANN BASED operating mode involved daily synchronization in Open Root Server Network’s root. There is another mode, the INDEPENDENT mode, there is no automatic synchronization and activated whenever the political situation of the world or a downtime of the ICANN root zone does not work. ICANN and several IXPs are indirectly under control of various Governmental agencies. Open Root Server Network model again started working in mid 2013 after the spyware activities were documented to be revealed by Edward Snowden.

An A record gives us the IP address/es of a domain. When the users try to go to thecustomizewindows.com will point to the right IP address. A record or Address Record maps a hostname to a 32-bit IPv4 address. An A Record is written in this format:

We need a DNS Server to resolve this. Without this entry, IP will not point to Domain name. Domain name has other importance than making it memorable. DNS server is usually a different set of servers which already resolved themselves and has established peering. Example DNS Server can be of Rackspace Dedicated :

Does the same work like A Record but is optional and related to IPV6.

CNAME Record is used to define an alias name. A CNAME record is written in this format:

These are enough to resolve a domain name or subdomain name. The www part has been discussed as a well known copy-paste based error. Do not add WWW before your new domain, root domain pointing is the right way and WWW creates too much complexity with HSTS. Servers will handle it as a subdomain.

Mail Exchange Record maps on an IPv4 address to the canonical name for that host.

Specifies the DNS server providing authoritative information about the domain including the domain serial number, and several timers relating to refreshing the ZONE.

A PTR record or pointer record maps an IPv4 address to the canonical name for that host. This appears in this way :

If Google System promoted “Bad Neighborhood” exists, this is the only place of concern. The IP addresses are basically not important for Google Search. Google is NSA’s public agency for data theft, they will distort the technical part to the common peoples.

We have a bunch of IP address, which none used ever with any website since 1986. That actually does not make higher SERP. It is very costly matter to rent a range of IP. There are marketplace for IP like Domain names. The peoples associated with the systems are not quite good in real life. Who will take a headache of these odd works? None except the employees. This things should be hammered in the readers mind to make you a bit curious to search about the details.

There are lot of Tools on command line to test the above records. As you also have a DNS, IP as you are using an IP from the ISP, your testing will use the DNS you are using. Do not replace your ISP’s DNS with a Public DNS – it is a potentially dangerous way to open your computer to the outsiders. There can be DNS Spoofing with your IP. If you run :

You will get the set of your localhost’s DNS. If you run :

You’ll get the idea, of how your ISP is resolving the IP. Use any online tool, even WebPageTest to check the initial setup. Run cat /etc/resolv.conf to get your ISP associated name servers.

host, dig, nslookup, ping are commonly used networking tools. You can run man host, man dig, man nslookup, man ping to read the manuals. You are getting confused with traceroute result, the next subheader is for that reason. You can use an online tool like viewdns.info to test your stuffs. You can see, only our 3 ports are open :

You have to hack via port 22. But we have Port Knocking installed. Your only way to hack is to use SQL injection. Unfortunately, we have no form plus you do not know exactly what our ingress-egress policies are. If you hack, you’ll think you have successfully hacked, but HP has excellent guys. They might change your computer’s DNS. In the mean time, the IP will be changed, new instance will be added. Because, we have real router, then subnet, subnet mask etc.

Analysis of How a Domain is Routed

These are Internet Exchange Points (IXPs) for peering. AS15412 is an entry which has a record against their router. This most of you do not know, there is a nice tool :

You will get terrified if you are not related to networking, go to the Graph : 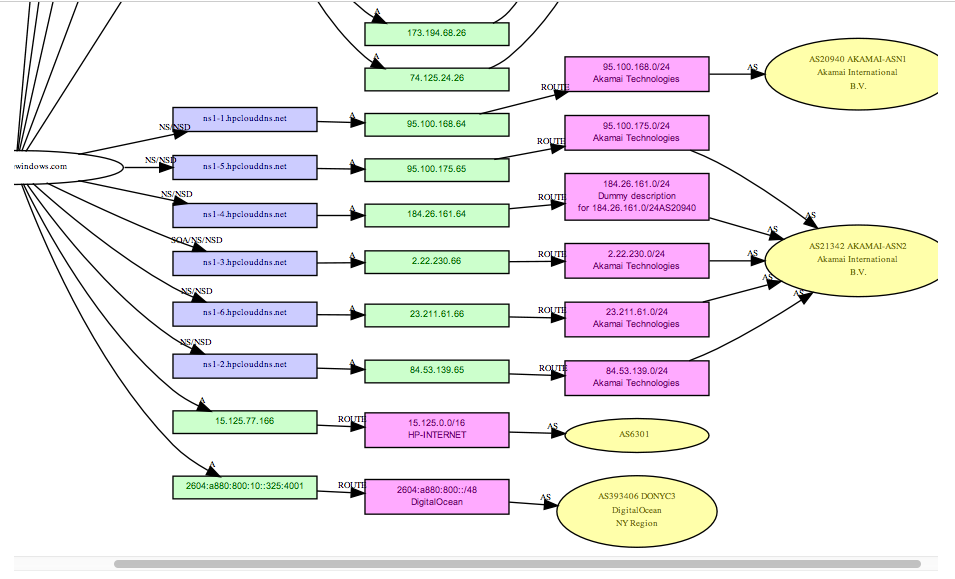 This is our full delegation :

If you are hosting on US, you will get faster testing result with US servers. With webpagetest.org, you’ll get live screenshot too. Best way to see if you have setup the stuffs rightly during the initial setup.

There is another protocol named BGP, you can actually telnet to the Public Root Server :

You’ll see that the dots are blinking…tewtewtew. Click one on your Mac / Linux and accept the prompts, you’ll get something like this :

There are tools viable on GitHub to test your server’s real availability. Be careful, do not run scripts. That is why no Cloud IaaS allows to run unlimited instances. If you have 150K instances and you test them every 2 minutes, 100 such usage can bring a mini Ddos. Thats everything about Domain, DNS, delegation a webmaster need to know. Matt Cutts told you? No. He will tell you Sci-Fi stories.

Tagged With how is a domain routed , \*@allstream net\