What is the Story Behind HostGator Credit Card & Passport Scan Verification

For me (who is writing this article), happened due to registration and non usage of previously registered same domain. The domain is abhishekghosh.pro, dot pro which itself needs manual verification to register the domain. I usually use Rackspace, HP Cloud, Heroku and OpenShift, but sometimes we need a graphical interface for more than 10 websites. Officially (as it appears); they think (or mock to think) the human is a robot. Their legal logic is – either cancel the older account or pay any due. Basically, that can never be a reason to ask for verification by sending Credit Card and Passport Scans.

Unlike HP Cloud or Rackspace, Hostgator do not have a callback function for the International users. You have to Phone yourself to their numbers. That can be hugely costly. These discussions can throw some light :

Except Few Governmental Services, Private Services which can have huge liabilities, never ask for the scan of Passport. There are hundreds of scammers around the web. Your bank will never suggest to send a scan of an active credit card. You can mask the Numbers but there are cheating methods available to remove them too! That is how watermarks are removed from Photographs! Your Bank might not take the liability of any damage.

It is not only the new users, I also got fooled and send them the scan Credit Card and Driving License! This wrong is done due to the factors – while creation of the new Account, Hostgator never gives any warning. You’ll nicely create / transfer the websites, suddenly at proper time, you will see that your websites are delivering web pages which are kind of like parked websites, you’ll get terrified. Proper time for me was morning of Valentines Day. Honestly, thinking so legally at all works is not possible.

Keep in mind – I have enough Judicial resource, lot of followers on Twitter. You might not be able to even pressurize them to fasten the process. All basically wants to get back the working website as fast as possible.

You’ll receive many emails for canceling the account. It is not unusual to wrongly cancel the new account. Where from the credit card and scan of Passport or driving license will be stolen, none can give warranty.

Conversation over email will waste a huge time, it worths only if you do not have a backup.

Hostgator was really good once. It got acquired by Endurance International Group for $225 million USD in December 2014. What I never knew is a big list, Endurance International Group is the owner of Fatcow, iPage, Bluehost, VPSLInk and many more companies which are poorly rated. Hari Ravichandran founded it. Yes, Indian name. There is actually big chain of controversial activities, which are better to read on Wikipedia.

Google steals data as a part of PRISM. We get angry. But honestly, Google never asks for Credit Card and Passport’s Scan so badly.

I have to file a formal case to defend any illegal service creation with my names using those cards. Someone might buy a mass killing weapon or sign a death certificate abusing the data. For an illegal work, I had nothing to do, I will get behind the bar. Personally I will suggest to close any account on HostGator. It is not unusual to find that founder Hari Ravichandran’s some relative is a powerful corrupted Political leader in India. Doctor supplied illegal weapons to Pakistan – it is obvious that my Lawyers got angry upon me. Then I have to cancel the card, inform RTO and get new one with the Court’s order. Over one years work.

I thought to save $10 per month (versus HP Cloud), now I have to pay few thousands to file a formal case, publish notices on Newspapers and do an affidavit. This publication also holds a value – it is exactly a kind of public notice.

It is meaningless to file case against them as individual. WHOIS data is enough for verification. Hardly one can ask to add a TXT record to prove the ownership of the domain. A web host has no such duty to check financial details. 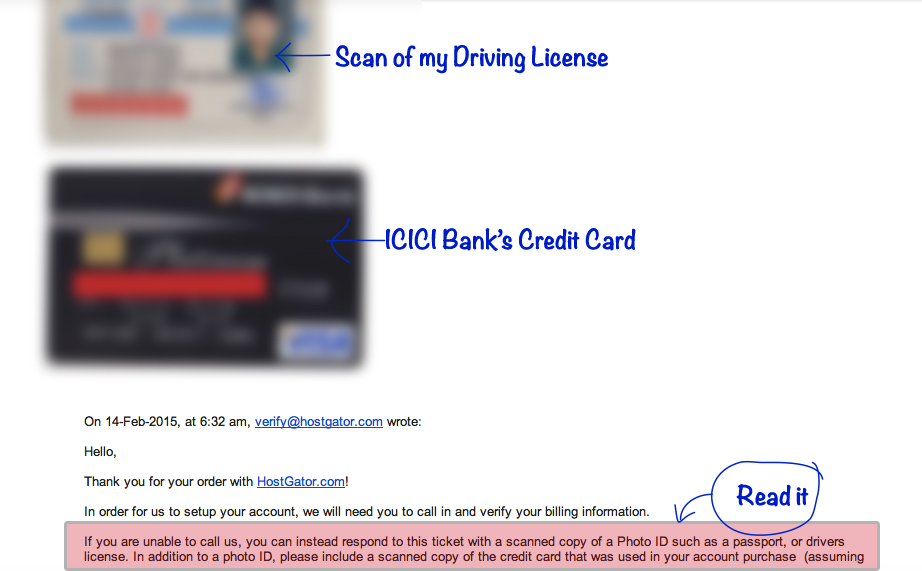 Free options are PaaS – Heroku Cloud or OpenShift. Less costly but powerful option is DigitalOcean. It is full IaaS not a shared hosting. If you need a free hosting control panel, there are lot of options. Plus you can install nginx and fully optimized.

With Cloud Automation, even working IaaS is very easy, with DigitalOcean, you can create a WordPress instance on the fly clicking some buttons. Cost will be $5 to $10 per month – which is your budget for the shared hosting. Hostgator has no own datacenter. CyrusOne for example is one of their Data Center provider.

It possibly has nothing to do with PRISM. NSA works at finer level. This is a typical Indian scummy method.
By the way, the PayPal account is merchant verified. Hostgator officially suggests not to take it “personally”.

This sending scans of ID are very common scams in India. In Bengali, Hindi Newspapers you’ll find lot of such Ads – send your deed of property, your all possibly identity and we will build a mobile tower. That is called mobile tower scam. You can do a search with mobile tower scam India, mobile tower scam complains and you’ll get lot of stories. These scams also have websites. You can find the domain WHOIS data about who sells, where hosted. Criminals are never very intelligent but merciless. Yes, you will find some LinkedIn profiles too.

Use Heroku Cloud or OpenShift or HP Cloud or Rackspace or IBM or DigitalOcean depending on your budget. You can not claim that Hostgator running an ID selling chain. I am not Internet Police, I can hardly alert you.

HostGator is no one to SUSPECT that a Paypal Account has been compromised or a Card has been stolen. Whose card has been stolen, the bank – all holds the liability. PayPal has enough ways to check the transactions. When they are acting as Internet Police, it is better to think them as Internet Thief. Adding own terms whether by a Government or by a Private or Public Limited company, does not make any thing judicially valid. Scam Phones are usually of some sort of Fake Authority checking data over the phone. People fears Court of Law too much.

If you load this webpage 3 times per minute continuously for 3 days, we will only ban your IP. We will not try to get your credit card’s scan. It is basic Shared Hosting. It is not possible to run a micro Ddos attack. HP Cloud, Rackspace spends own money to callback before activation or usage of the account. Normal. They ask only the purpose, name, address and last four digits of the credit card. They do not ask to start the webcam and show the credit card. It is not quite valid logic from HostGator, that they have lot of clients and hence they can not resolve properly.

This Article Has Been Shared 143 Times!