It is possible to do SSH by running a shebang script from Mac or Linux Localhost, Update the Server where the SSH process is Private Key based. This is a requested guide for bash scripting, take it as for Educational purpose. We honestly, do not think it is a safer method to update production server in this way! Yes, this will work HP Cloud and it is really funny to watch the update is gaining on, as if a ghost is typing the commands.

When you’ll run the script, it will ask for the .pem file’s path, then the IP address. You have nothing to do afterwards. It will complete the process and exit the remote server’s bash and give an output with timestamp. This is very basic shebang script but yet, it has many things.

Bash Script to SSH and Update Ubuntu Server : HP Cloud and Amazon Only

This is basically not possible to run other setup like that of Rackspace or DigitalOcean. Basically, we login as ubuntu in HP Cloud and Amazon, that ubuntu belong to sudoer group. Just see the script first :

There is no if not then logic – it is a simple, 100% mechanical script. Basically, when login via SSH, we allow a time to type and run the command, but; in this way, there is no comma, full stop in running the commands! Actually after becoming root, the exit command runs, it again become ubuntu and run the command : 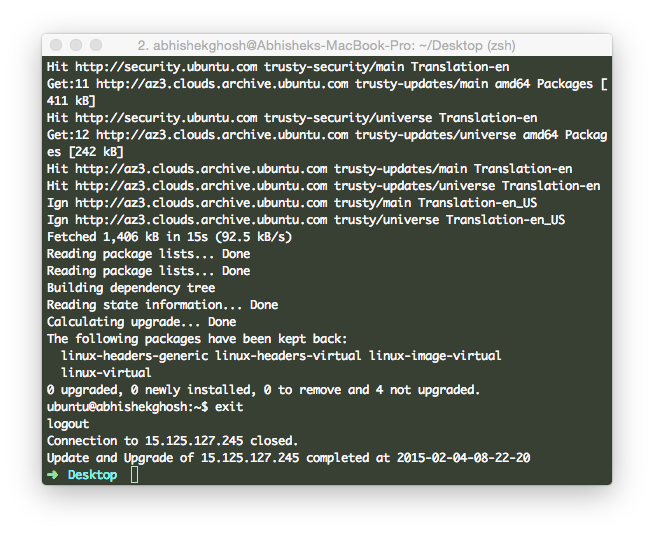 That echo " " is helping to run the command, else, it will exit, because, as I said – “there is no comma, full stop in running the commands”. Here is the gist on github and practically you can run these commands :

It is better to run the script, where the .pem file is located, you’ll need only to type the name of the file (with extension), else you have to type the full path.

Executable Scripts are quite dangerous! You, basically can not run the commands in that sequence with a keyboard to do the work.