Confusion in Developmental Priority for Mobile App Websites Vs Mobile Ready Websites is Not an Uncommon Issue. This Article is Written Keeping Many Variables in Mind. The way the mobile marketing is currently appearing, supposedly not going to remain for long as it is one of the fastest changing segment in the age of Cloud Computing, Software Defined and Internet of Things (IoT). Expert opinions from Gartner’s researches speculating that, a point where mobile hardware reaches the saturation would arrive, but in real life; that exactly not what is happening. Google Glass, essentially a mobile device; with the increase penetration of wearable smart devices and Intel’s approach towards hardware powered interface does not appear to welcome the stagnant situation.

The growth of this market does not just include hardware and software updates; it also affects the way we perceive media, advertising, services and entertainment as previously represented in the previously published article Cloud Computing and Social Networks in Mobile Space. With numerous devices with variation of Operating System, Screen Resolution, Hardware Configuration and variable Software and Hardware Capabilities, it is gradually becoming more harder to define what exactly a mobile device really is. Tablet can be smaller in size like a mobile phone or mobile phone can be as large as a mini Tablet. Size of the screen also matters.

Regardless of whether you, the reader is a small business owner or the CIO of a larger company, one is forced to think about the way it is already affecting the business and finding out how one can leverage this phenomenon towards advantage. There are a couple of main segments to research before one can decide which is the right course of action is for agile software development :

In terms of the sheer amount of money being invested for it, without any doubt, the form of digital advertising is the fastest growing market in history and one can expect to see changes as more and more people start transition over to smartphones, keeping the BYOD phenomenon in mind.

Only a few years back, we had huge differences in people™s spending habits via their tablet and smartphone devices. Even the amount of time people spent on their gadgets was not comparable. Things are changing though and the gaps between smartphones and tablets.

Advertisers are getting more enthusiastic about mobile optimized ad formats and reserving ad placement in front of the right target audience. There are projections stating that a few years from now, mobile Ad spend is going to be somewhat near $50 Billion per annum. In case you are wondering what is the most popular forms of mobile advertising are – it is basically video, both in social networks and searches. Each one of these is expected to grow as more apps find their way to the market and billions of smartphones find their way into people’s hands worldwide.

Key points – where the money will be:

As expected, display Ads or rather the video ads are going to be among the most profitable formats for the advertisers and we should notice a lot more of this phenomenon as peoples’ at least, partial transition of work and entertainment from their computers to smartphones. Revenues from United States indicate a 5 year growth rate of almost 94.83%. Roughly near double.

The largest piece of the pie will go to search and social media, which is not that surprising, considering how targeted these options really are. Search will remain as the most profitable form of mobile advertising.
Mobile Ads in apps do show better performance than on the mobile web site, and the click through rates (CTR) are almost 100% better incase of in-app compared to the web.

Another major shift in technology brought upon by the mobile revolution is the changes in mobile payments – this industry is going to affect a lot of everyday shopping experiences to the end users, similar to how PayPal did when it first launched.

If we take a look at events that unfolded during the past few months, we can easily notice how the mobile payment process is becoming simplified and people are more open to paying for things using their phones (or rather the mobile devices). This was certainly the case with – BitCoin wallet Apps, Amazon one click purchases, AppStore finger ID, one-click payment Apps, etc.

When Apple launched Apple Pay, this also allowed their users to purchase from over 200,000 retail locations nationwide. They even have some of the most sophisticated security features reflecting what people are generally concerned about. Corporate retail stores are expected to jump on the bandwagon and we are only going to start viewing more retailers put out their own Apps allowing customers to make instant payments/orders.

In-App features will change a lot too. For instance, as long as people can bypass payment by being able to order or instantly pay through their phone – this could change things like the way we pay for our dinners, bars, and make everything software only – We Are Reaching an Age Where Computing is Defined by Software.

We got astonished this week, when an official made contact with us – a new card with BlueTooth technology has been developed as a startup – only for making one-in-all solution for storing all the Royalty card points via the mobile devices. Ideas in Mobile Payment is changing.

As you can understand, there are plenty of opportunities popping up and as a CIO or Owner, you should not miss out. The whole mobile retail experience is in need of both Mobile Web or Mobile Ready Websites support as well as the individual apps, but do they always go hand in hand? Well, there are certain habits that people of all ages engage in which it could make it harder for – the developer, CIO, Owner, Front End Designer to decide whether you need to optimize your business for the Mobile Web or Mobile Ready Websites only or make an app in addition.

If you are selling things, you can learn a lot from the bigger retailers out there. For instance, Best Buy has its own app but almost 100% of its visitors view it via their mobile browsers. Home Depot is of no different. People will use whatever is more efficient and in their case, they did not really need an additional app. This website does not require a separate App – it will be a Hype to jump to develop iOS App, Android App, Windows App and Java App. Additionally, Cipher-Suite for HSTS websites will not match for the older devices.

On the other hand, Sears with the best optimized website for mobile browsing managed to obtain a bigger percentage of sales than what Amazon and Wal-Mart did.

Things to keep in mind about mobile optimization and the mobile web:

The largest revenues generated by mobile shopping go to the top names in retail – over 60% of all sales are made through the mobile web while the rest are in-app purchases.

If you are selling items and you have to pick between mobile optimization and/or developing an app, go for the former. More people use the mobile web to purchase and optimization is absolutely essential. Surveys indicate people prefer to use their browser to shop instead of an App.

How To Expand Your Service – Mobile Apps Done Right: DIRECTV

Here is a great example of a successful company taking advantage of mobile. You might be wondering, how on earth could a satellite TV and Internet provider company take advantage of mobile devices? Well, according to Directtvinternetreviews.com, even when it is not about shopping there are ways you can offer more value to your customers by making a mobile app. Take a look at some the features they are offering:

They let people stream live TV on their phones.

People no longer have to sit in front of their TV to get the content they want and because DIRECTV realized their customers wanted the mobile experience too, now they can watch TV on their phones as well. This includes top channels like HBO and users can stream even when they’re away from home.

Smartphones are packed with physical features developers can take advantage of and base an entire idea around. In this case, people can just voice search the channel they’re after and watch instantly. They’ve even gone as far as letting users talk into their phone and display the dialogue results on the big screen, Iron Man style.

If the business have something unique to offer to the valued customers, the business (that is you) can do it via an App which could also serve as the main selling point. For instance, they offer different titles before those make their way to Netflix so that the peoples, who are going to be clients are intrigued by the features and want to find out more. Packed with the rest of their features, one can realize that the mobile expansion is a no brainer for just about any serious company out there. Biggest competitor of DIRECTV mobile App is DISH Anywhere App. A third party published DISH™s App review. 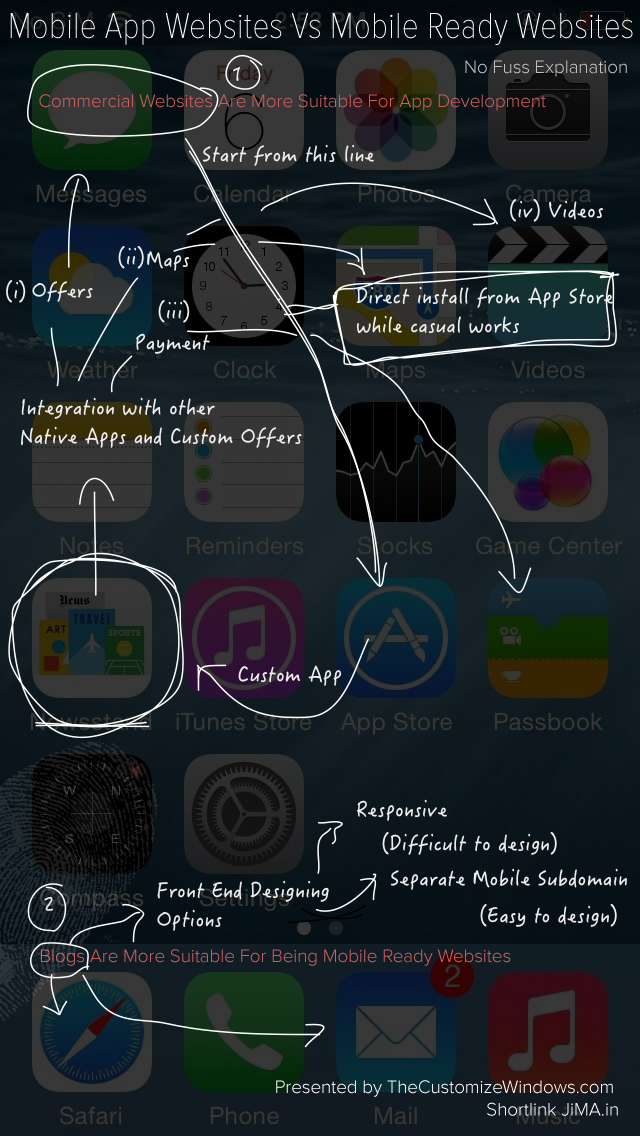 It is a fact smartphone browsers will continue serving as the gateway to our mobile shopping experience and they are also the first thing people utilize to access the online stores.

If you are trying to figure out what to optimize first, it is best that you start with the search feature as most people wind up using it on your site. Over 60% of people surveyed in a Google study said they prefer to visit the main site directly while roughly 20% look for a mobile app beforehand (as was the case with Best Buy).

The bottom line is that you should not miss out on utilizing the resources available to you. Even if we take a look at the biggest retailers in the world, more than 40% of them are still lacking a properly optimized mobile website. More than a third of all major retailers display desktop versions of their website and responsive sites are even rarer. Leverage this to your advantage! You can check This Week, Taasky, Cook, LittleBit, Paper – they are known great Mobile App Website Designs.