Cloud Based Storage is not a primary solution in this situation. There will be data latency, a private or hybrid cloud can be used for archival purpose after proper encryption of data. That encryption should happen in another hard disk or another node. So, the main Hard Drive has three tasks – constantly writing the data, helping to copy to another disk and deleting the written data. On normal situation, we basically never perform so much intense work. On servers, we also need to constantly write the data and delete the written data; but first that data is usually of an Application Server – a database. The Web server node facing the traffic, only deletes the cache and writes the new data, for example like that on Nginx-PHP5-FPM setup running WordPress. But video is a Binary Large Object (BLOB). BLOB data is stored as a single entity in a database management system. There is no universal database support for blobs. Low Writing Speed Will Not Matter for Web Server’s Hard Disk. We can increase the scalability both horizontally and vertically.

Exactly this is why we use Content Delivery Network and Streaming CDN. Akamai and Seagate has lot of researches and analysis of these read-write stuffs in technical way. If you copy a large BLOB file from one directory to another directory on OS X – practically which is an pro grade system, the copy never happens blink of an eye, even from command line. That is not exactly real time time. When we use iMovie – the difference of newer Macs becomes apparent.

There is ATA-7 Streaming Command Set for AV hard disks. These hard disks, in the same way is not intended for normal usage. When a hard drive is formatted, multiple zones are created and number of location based sectors per track are created. The Streaming Command Set includes tables that describe these zones. This why the average seek time get optimized. Setting these demands experienced persons.

Which Brand of Surveillance System Hard Drive is Better?

Akamai is the best Content Delivery Network is not advertisement – this is fact. We can not buy Hard Disks of hundreds of brands, Seagate Surveillance Optimized Storage appears to be a better option for our need. Tom’s Hardware did lot of comparison between Western Digital Purple and Seagate’s Surveillance HDD. Seagate’s Surveillance HDD appeared to be 20-30 MB/s faster in transfer rate than Western Digital’s Purple across the board. (HD Tune 2.55). Access time is also less for Seagate.

As both brands cost the same, it is like choosing between Rackspace and HP Cloud for Enterprise Grade usage; if Western Digital Purple used to cost 25% lesser, then possibly we can think about Western Digital Purple for low end system, it is like DigitalOcean – $40 per month for 4 GB instance, but people say that instance on DigitalOcean can get deleted and DigitalOcean will give $25 for such disaster. HP Cloud will cost double, Rackspace 2.5 times. But; for quality we will think about both HP Cloud and Rackspace; not DigitalOcean. Yes, for cost reduction, we also use Hostgator shared hosting and DigitalOcean for many domains. Even we use Red Hat OpenShift PaaS. But this website, which performs excellent at all tests is hosted on HP Cloud. Reason is simple – higher reliability. 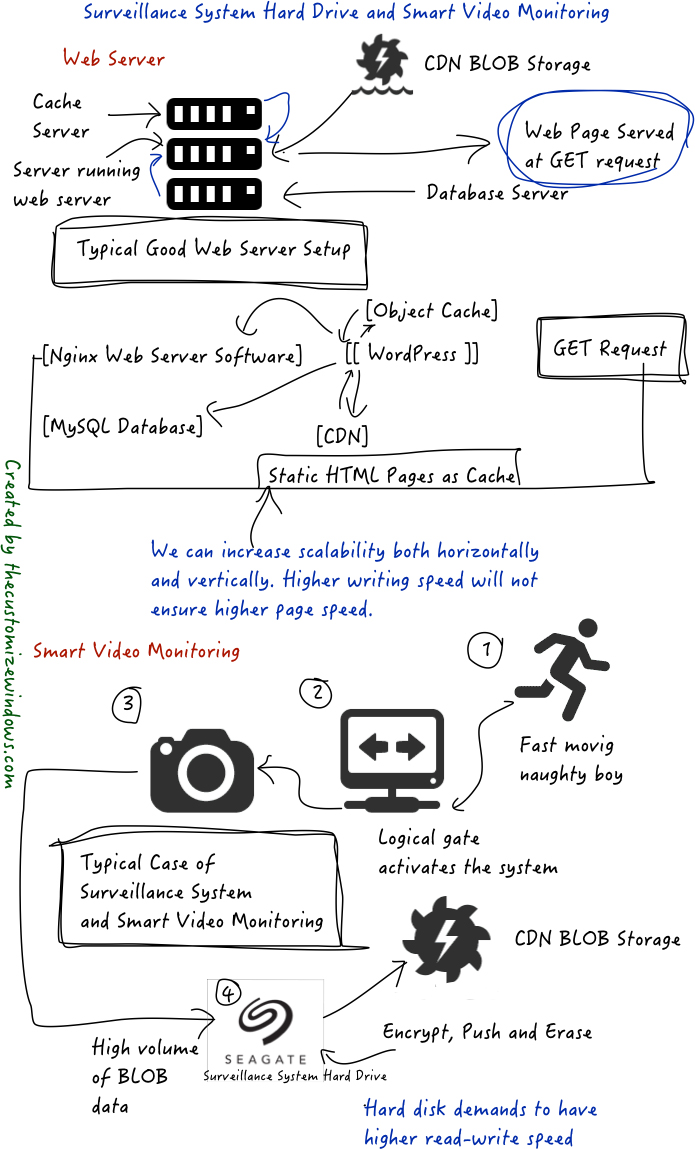 Basically the users of the surveillance systems, do not care about the minute parts. To care, one honestly need the working knowledge. Typical usage of Surveillance System Hard Drive can be :

Orthopedics Live Surgery involves usage of lot of high end devices and most people like us are kind of IT-Health hub. We have not tested for this thing for Orthopedics Live Surgery, but possibly will perform better. IEEE 3D Medical Standards is set by the team of Dr. Young Lae Moon, MD (Orthopedics), Ph.D. There are lot of such peoples. This video gives a nice idea for the thing :

This is not an official usage, but possibly we will test in future. Hacking is our work!

This Article Has Been Shared 288 Times!