Advertisement
You are here: Home » HHVM 3.6.0 & End of Our Tutorial Support For Cloud Server
Advertisement

HHVM 3.6.0 LTS Has Official Features Which is Time Consuming to Fix Against the Common PHP-MySQL Apps on Cloud Server including WordPress. This is our official last publication on HHVM, without any claim of the fact – whether HHVM 3.6.0 LTS is Superior of Inferior to PHP Next Generation or PHP5-FPM. We Will NO LONGER answer, solve issues with previously published articles which will install HHVM 3.6.0 on request by the common readers. If any one gets issue with the back version of HHVM against the tutorials – we have the full support. The reason is not HHVM 3.6.0 LTS itself, they definitely reached their way making their PHP thing better, but it is risky for us to recommend to run the common web software by a beginner level reader who will read our articles for his / her own self managed website hosted on the Cloud Servers, may be for the first time in life. Most of the Cloud Server providers provide either partner image or their minor tweaked repo by default, which bears the unmodified codes. Dedicated Server and Colocation servers might have different software level support. The phrase Cloud Server is loosely used to include the traditional virtual private servers.

Reasons to End Our Tutorial Support Against HHVM 3.6.0 LTS and Above

The raised issues, which are marked as Features or part of documentation are bugs to run the normal version of PHP-MySQL based Web Softwares (read Free Softwares like WordPress, Piwik, Joomla etc.). The Issues of HHVM 3.6.0 LTS, to some extent are discussed here (Linked to WayBack Machine), which includes one comment from the Author of this Publication.

However, it appears that there are more issues :

It is beyond our capacity to give fix for so many varied problems, we can not recommend using symlinks to somehow fix an issue – it can open some unknown security issue or may be a way to run the surveillance tools by Governmental Spyware Agents including Facebook itself.

We are multiple times DMOZ listed website, our articles has been used for small to big works by institutions and individuals Free of Cost, we can not support a package, whose maintainer is nearly blacklisted by Father of Free Software Foundation, Richard M. Stallman. 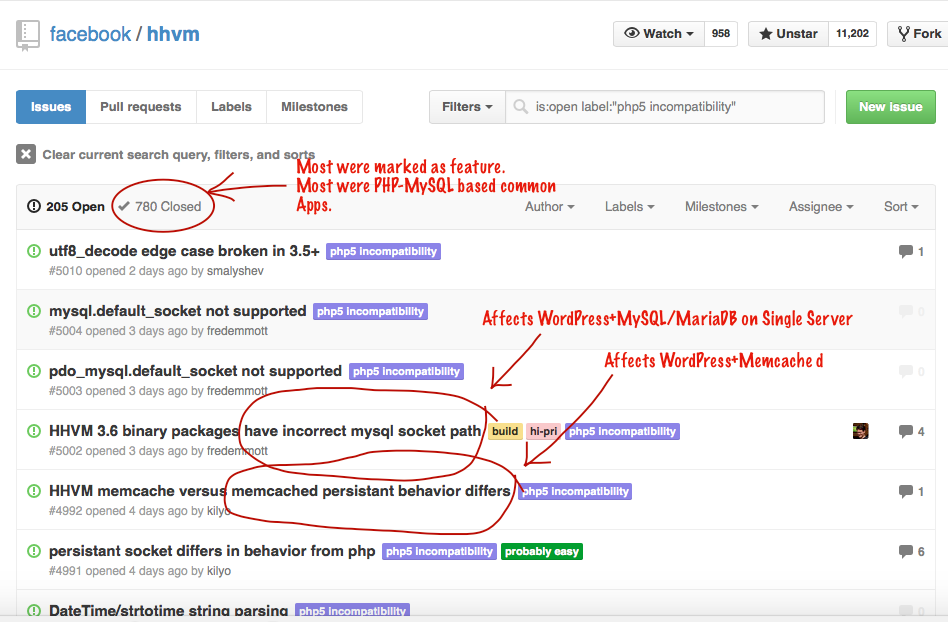 Affected Tutorials For HHVM 3.6.0 LTS and Above

There can be more guides. Gradually, we will add specific fix and information box on such guides. HHVM 3.6.0 is faster, it is so faster that WordPress can throw Error Establishing a Database Connection WordPress. Which, eventually can be difficult for a beginner to fix.

It is not advisable to develop PHP softwares natively supporting HHVM 3.6 or above as such changes in coding can break the basic freedom to use normal PHP or PHP5-FPM. It took 72 hours for us to fix and get back to normal speed with PHP5-FPM from HHVM 3.6.

We do not advertise to test this website’s page speed scores. However, we have not seen huge difference with Nginx Microcache. Right now, it is slower to get back the optimized scores after flashing the cache, that is mainly for adapting the nginx.conf file on fresh instances. Flashing 5K Posts takes a huge time to re-build the Cache. There are minute tweaks which is better to allow to do slowly as opening of the webpages, stability of the servers are more important than page loading speed itself.

HHVM 3.6.0 is really faster than PHP5-FPM, there is no pun in the statement.

This Article Has Been Shared 446 Times!

Articles Related to HHVM 3.6.0 & End of Our Tutorial Support For Cloud Server