Source code and Licensing matters for many reasons including privacy. Often Readers Ask the Question – Free Software Vs Open Source Software – which are better to use terminology or what exactly they mean? Today, standing in mid 2015, all the suspected Governmental Spyware activities via various monopoly business has been quite obvious even to a layman. There is difference between Free Software and Open Source Software. There are levels of users’ freedom, often discussed by Richard Stallman, if that topic interests the reader, he/she is advices to watch some videos of his speech. After Edward Snowden’s revelations, possibly many users are concerned about their privacy.

Yes, most of us are forced to use Facebook, Google Plus or other suspected services which are spying us, but a clear idea about them can enhance the reader’s privacy plus the others’ privacy. Microsoft said once that GNU/Linux is a cancer, last year they started to say that they love GNU/Linux.

OS X or UNIX possibly not a great software but we passively encourage to learn the commands and catchup with us. If you compile a software, what exactly you are doing with your computer? A $500 – $2500 device is not made for watch videos or browsing Facebook. If for the initial convenience or the look you want to use OS X or UNIX, there is no problem at all. But you gradually should understand, what is Freedom. Softwares should not control or rather run a surveillance on the users. Apple’s OS X unfortunately does it. We know on OS X that wget is at /usr/local/bin/wget, but we lack the control on how Apple tracks us. We frankly can not update OS X in the way we want. We are been forced to use App Store. If Apple distributed the updates freely like GNU/Linux, say about the kernel rightly instead of hiding the fact that Linus Torvalds was hired for creating OS X as to upgrade from Mac OS, it would be a free software. It is not that more people would steal Apple’s icons. Stealing is immoral and demands no license. 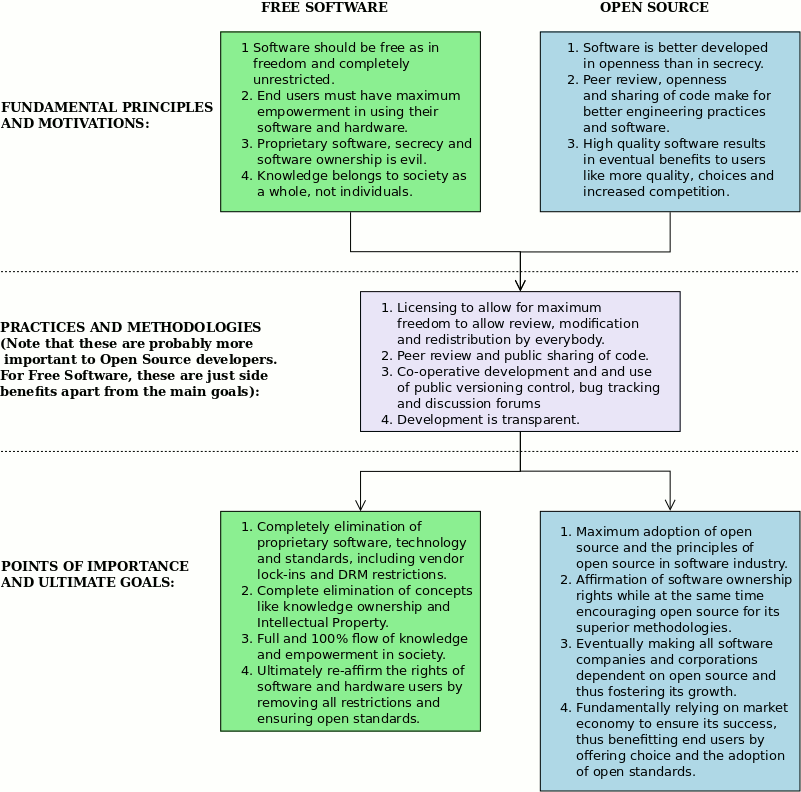 It is often cited, the old Open Source Initiative FAQ expresses both the substantial similarities and differing viewpoints between free software and open source ideologies. Currently, the ideology differs between the terms Free Software and Open Source.

It is quite wrong idea that Free Software can not make money. The company behind WordPress makes quite good money, OpenStack itself helps the bigger brands to make money. Free Software should be used only with the exception where Free Software is not possible to use as a terminology.

Some peoples makes the things inclining towards a virtual fight, that is not expected. Both branches has similarity in development and 180 degree reverse of Closed Source software business model. All religious books are actually books with unwritten Free Software license. All religious songs, most folk songs bears a unwritten Free Software license.

Actually we can not impose a software license on developed by some other. That is a basic problem of not using a Free Software License. When you are creating a snippet and uploading to Github as gist adding one line # Licensed under GNU GPL 3.0 helps us hugely. If you start from bin/bash, thereafter if, none can understand what type of distribution you will like to use. As long Google is living, there is problem of linking towards others’ website. This text is not Licensed under a Free Software license, you have no control over it. It is probably desired.