Advertisement
You are here: Home » OpenStack Magnum & Container as a Service From Cloud Providers
Advertisement

OpenStack Magnum is a project that combines the other softwares on multi-tenant Cloud software OpenStack to provide Container as a Service. Previously we have discussed about container based virtualization and Docker. OpenStack Magnum is a project that combines multi-tenant OpenStack, Docker, kubernetes, and Flannel and the function is not to improve the technology of container, but just to make it available to the providers using OpenStack. Magnum uses OpenStack Heat to orchestrate an OS image which contains Docker and Kubernetes and runs that image in either virtual machines or bare metal in a cluster configuration.

Basics About OpenStack Magnum & Container as a Service

The service has joined the list of projects in March this year. The team of programmers developed the service API that allows yto make the management tools of the container, as Docker and kubernetes, as available resources in OpenStack.

OpenStack Magnum offers a choice of Container Orchestration Engine to deploy and manage containers in locations called “bays”. Currently for clustering operations it uses Kubernetes, but its modular architecture will allow it to remove and insert new technologies in the future with ease. The team of OpenStack Magnum is backed up by 18 companies that contribute to the development of more than 100,000 lines of code and 1,800 sets of patches. 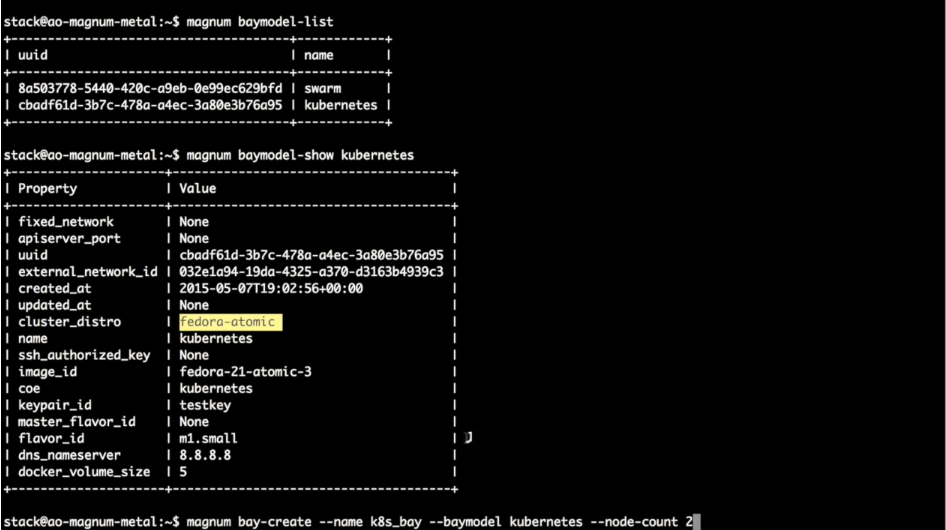 The Future of OpenStack Magnum

The new project is called OpenStack Magnum is no coincidence, since it shares the name of a famous model of gun. Cloud architectures are built around the idea of standardized images and container parts. While the containers are being developed to make the life easier for the programmers, making it easy to assemble new applications, another major topic of interest is their efficiency. Rackspace believes that the containers will bring another order of magnitude in terms of efficiency, retracing a path very similar to what has been accomplished by virtualization in the 2000s, although it has been pointed out that the containers are a complement, not a replacement of virtualization.

The container, therefore, improve operational efficiency by eliminating many overhead. With the introduction of the container no more duplication of common stack, operating languages ‹‹and so on will run. This capability is especially important for the companies developing hundreds of different applications. According to Rackspace, about 80% of what is in the cloud today is very similar from customer to customer, so there could be a high level of commonality. Further pointed out point is that the containers are not a tool of isolation for safety, but are hypervisor. The future of cloud and consequently of OpenStack, according to participants at the last summit in Vancouver, passes by the development of containers.

This Article Has Been Shared 158 Times!

Cite this article as: Abhishek Ghosh, "OpenStack Magnum & Container as a Service From Cloud Providers," in The Customize Windows, May 29, 2015, January 29, 2023, https://thecustomizewindows.com/2015/05/openstack-magnum-container-as-a-service-from-cloud-providers/.
Source:The Customize Windows, JiMA.in