The Web GUI Reminded Us of the Fine Creativity of Rackspace, Power of HP Cloud, But it Lacks OpenShift. Here is Our IBM BlueMix PaaS Review. This review is for the users who really used Rackspace, HP Cloud and at minimum understands the hardware behind. Theorists using Azure or Amazon will frankly not understand the real meaning of the wordings without using Rackspace’s belief network powered monitoring. Apple should get ashamed about the intuitive web designing going on the machines right now. IBM BlueMix is a mixture, which is not exactly PaaS to the end user, it is more than PaaS. That more is what IBM lost in Microsoft era. It will be pleasure to watch that IBM, HP is cleaning up Microsoft and Amazon. Wordings or rather verbal diarrhea of Microsoft CEOs were too harsh and the Free Software should teach them a lesson.

We used typical Platform as a Service so far. Best was Rackspace Cloud Sites, an aPaaS which is oriented for the elegant clients who will run pure websites.

Users started using Heroku as PaaS. IBM BlueMix PaaS has some resemblance with Heroku’s web GUI from the color combination but the loading is far superior. The artistic crafting of web designing of Heroku is mechanical. There is no intelligence of machine learning, advanced Javascript frameworks.

RedHat OpenShift gave the first exact PaaS an ordinary user needed, even for free. OpenShift Origin is a Free Software which can run on OpenStack. 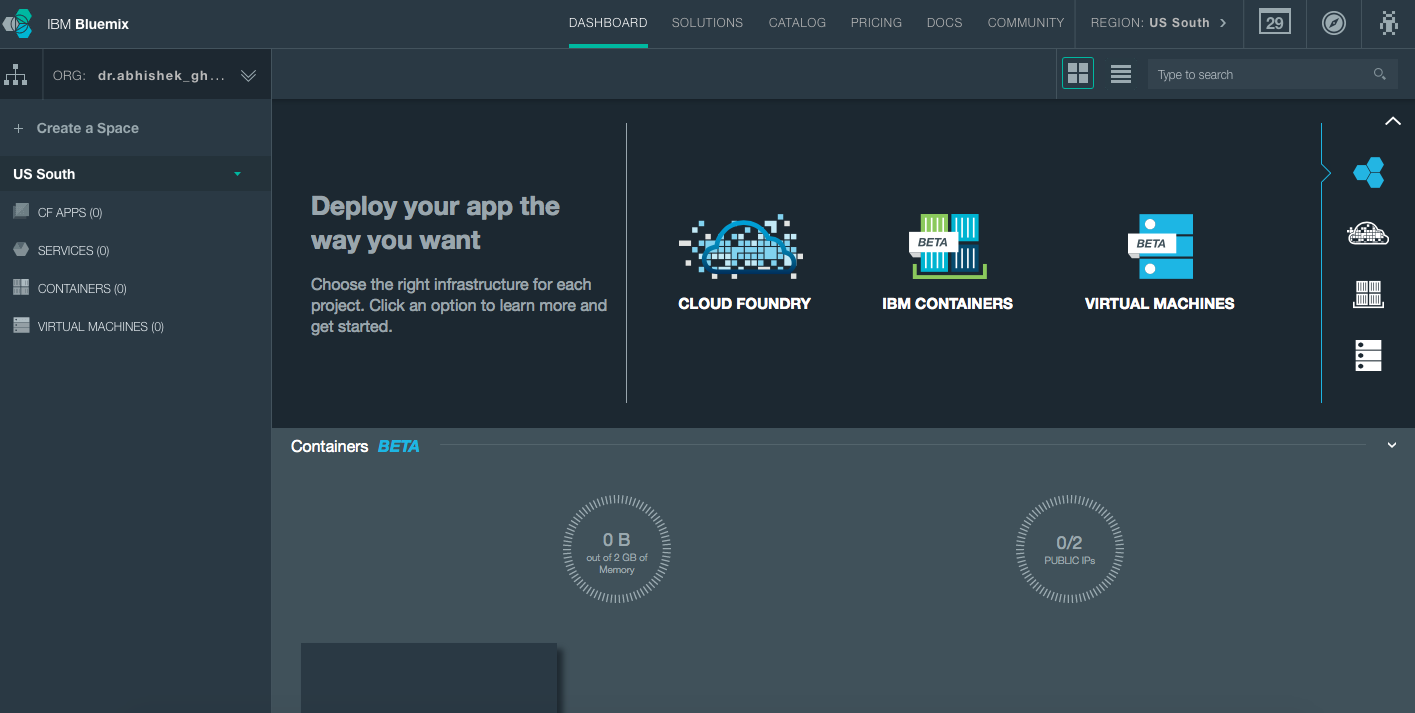 There are two datacenter at this moment – US South and in England (rather United Kingdom). UK offered typical PaaS style services nothing new to describe but the scent is clearly – OpenShift would be a better choice for IBM. OpenShift has ready to use normal web applications. Currently, IBM BlueMix PaaS is not exactly for 100% ordinary works – United Kingdom region’s softwares are advanced, yes normal PHP, Python, Ruby – all can run plus there are third party softwares, but there is no huge advantage over OpenShift hosted free PaaS.

Actually HP Cloud is also trying in the exactly same way of PaaS integration, not much known to the open media. You have to spin the PaaS in IaaS in HP Cloud. We became used with Heroku, OpenShift style. OpenShift did lot of changes in PaaS. Links to the documentations are personalized, like this :

Without using it, it is not possible to describe why the possibly Watson part made something more than OpenShift. Era of mainframe simply came back. IBM and HP simply proved again – hardware manufactures are the providers, softwares are Free. iPaaS to Internet of Things – full coverage. HP and IBM are raving their UNIX mainframe engine. Hiring developers, creating softwares and selling them at high price in closed source model possibly going to end.