Hardware Accelerated Graphics for Desktop Virtualization : Necessity is the Mother of Invention

Originally designed for streaming video game (eg play from your PC Windows tablet edition of one of the latest video games available) and relegated to only Windows ecosystem, GRID has subsequently paid to the enterprise (processing of special effects in the movie studios, professional using CAD products, companies in the engineering sector etc).

From the point of view of Nvidia’s commitment – server vendors such as Cisco, Lenovo, HP and Dell have certified compatibility with Nvidia for about 125 server models, including some variants of blade servers. GRID 2.0, in addition to supporting Linux operating systems, promises to host a server on the same GPU amount of users double the previous incarnation (64 to 128). Also with regard to the performance, a computational power has almost been doubled – in fact the employed GPU architecture is Maxwell based, which also rely recent solutions on mobile. An increase in need of GPU in private cloud environments forcing the companies to try to remove the barriers that slow down the spread.

The need for high-quality, three-dimensional graphics can be found in almost any business or institution, whether it is reviewing a CT or MRI scan with a patient in a healthcare setting, designing products using computer-aided design (CAD) or computer-aided manufacturing (CAM) software, or processing seismic data in oil and gas exploration. The capability to rapidly render immersive graphics that can be readily manipulated in real time can positively affect outcomes for businesses, researchers, and patients.

Coming towards the field of Hardware Accelerated Graphics for Desktop Virtualization, two companies are prominent – Hewlett-Packard and Cisco. 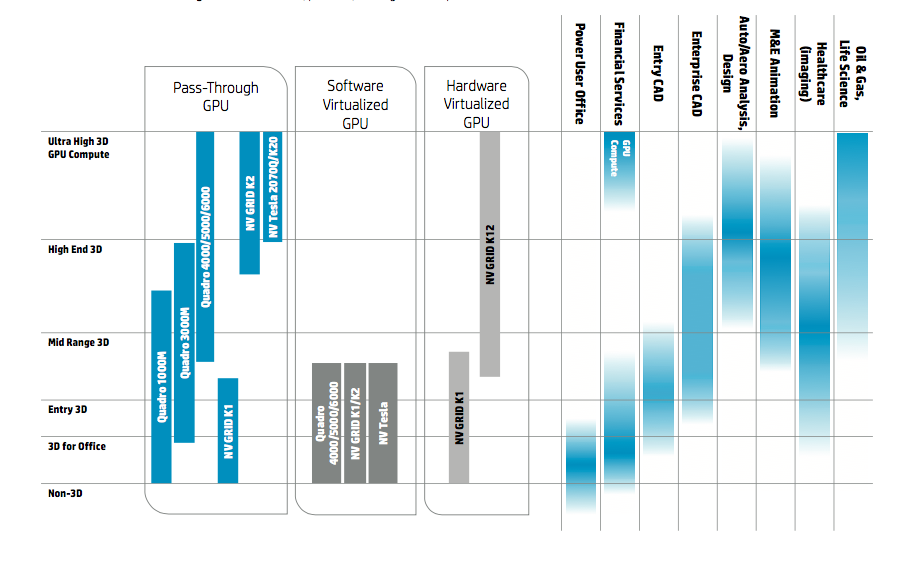 This method is the classic Workstation and PC blade remoting architecture. The client OS is installed directly on the blade hardware and no virtualization is used. End users connect to the workstation via remote protocols such as HP RGS, Microsoft RDP, and Citrix HDX 3D via client hardware. This method is still used today by users that demand power and the performance of dedicated hardware.

Also known as Direct Attached GPU or vendor specific “vDGA” (VMware) and “GPU pass-through” (Citrix). This method allows discrete PCI GPU devices to be directly mapped to a virtual machine for dedicated 1:1 use by the VM. The virtual machine has full and direct access to GPU, including the native graphics driver, allowing for full workstation class graphics and GPU compute performance in a virtual machine. Typically intended for high end 3D and GPU Compute users, the GPU device is directly owned and managed by the VM operating systems just as in a desktop workstation. The GPU driver is loaded within the virtual machine.

Also known as NVIDIA GRID vGPU is the NVIDIA/Citrix implementation of the technology, True Virtual GPU offers the benefit of GPU scaling like the software virtualized GPU (API intercept) and gives the performance of a native NVIDIA graphics driver like the pass-through models. This technology is currently implemented by the NVIDIA GRID K1 and K2 products. The GRID GPU is shared between multiple VM’s similar to API intercept, however in this model each VM has direct access to the GPU via dedicated channels managed by the NVIDIA GRID vGPU Manager. Unlike the software virtualized GPU (API intercept) model, the NVIDIA GRID vGPU Manager within the host hypervisor manages the VM to GPU channels, guaranteeing each VM has a dedicated amount of vRAM per user and direct access to the GPU. Administrators will have ability to assign 1 to 8 users per physical GPU depending on their workload needs.

This Article Has Been Shared 544 Times!