At the beginning, Computer Aided Design (CAD) was merely a tool for technical drawings. The addition of 2D was only necessary as technical objects not only drawn with computer assistance, but as a virtual three-dimensional body. With the help of a so-called 2D CAD system the result is exactly as you draw by hand and sections of spatially extended body are usually created. The drawings are first made ??visible on the screen and then on paper plotted or printed.

The formerly hand-drawn line is the basic element in a Computer Aided Design (CAD) system. These softwares were made ??with the “pre” basic objects of the system: Straight line, circle , ellipse , polyline etc. The internal representation of these objects is based on vector, that is, only its parameters are stored (for example the two end points of a line or the midpoint and the radius of a circle). In this way, the storage requirement in the computer was small (contrary pixel graphics ). The object is created from the few data at output.

When drawing with height, the objects got only one more attribute. Therefore, the progress of 2D-to 2 ½ D CAD system mainly consists of the ways to represent the modeled body of a chosen point of view as spatial objects, that is, to draw. Lines are bodiless by definition, but can be seen as wires. Thus we call this simplest of CAD modeling species next line or wireframe edge model. In order to distinguish the front from the rear, Hide Hidden edges were developed and added. 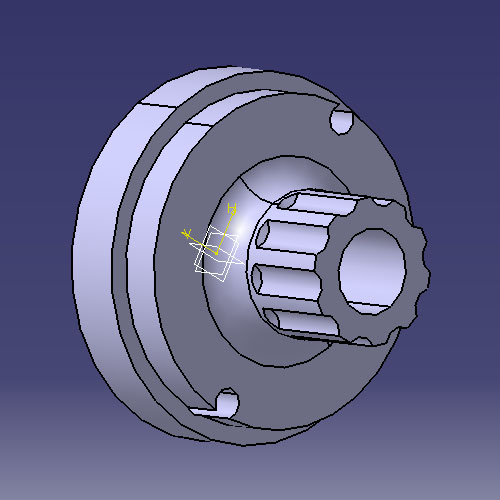 3D CAD task is much more resource demanding than in the plane (2D CAD) or to draw in space (2 ½ D CAD) apps. The computer can create a virtual model of a three dimensional object. Besides the geometrical and physical properties can be simulated, so-called solid model geometry – like the additional physical properties such as density, elasticity coefficient, allowable deformation and stress, thermal and electrical conductivity and thermal expansion coefficient has been added.

It has a surface with structure and optical properties. Such a body can be described as virtually elastic, plastic and with thermal deformation. Its geometry and material properties are, for example, the requirements for a finite element program, with which it is examined for deformation and breakage.

An intermediate step is the so-called surface modeling. It is used when the surface the shape of an object and is of primarily importance. When automobiles are designated by the aesthetics and the current taste pretty arbitrary forms of body -panels in aircraft consisting of fluidic coming optimizations forms of wings – and hull -plates, which usually have no recordable forms. The surface model is envisioned as a sheet of metal model, but the wireframe also no mass. The objects are merely geometric surfaces. Solid models are usually of simple primitives ( cube , pyramid , cylinder , cone , sphere , torus composed). For example, a lying triangular prism are combined with a vertical rectangular if a chimney is to stand out from a house roof.

FreeCAD is a parametric 3D modeler application which is free and comes with LGPL License. BRL-CAD is a powerful cross-platform open source solid modeling system.