Advertisement
You are here: Home » Why CentminMod for HTTP/2 Ngnix LEMP Setup is Practical
Advertisement

CentminMod originally was just a script to automate LEMP setup. Typing commands on SSH is usually suggested for own production servers for various reasons. Indeed we have few thousands guides on them. But, Today We Will Discuss an Opposite Matter – The Reasons Why CentminMod for HTTP/2 Ngnix LEMP Setup is Practical For Cloud Server or Dedicated Server. After many testing, we noticed that CentminMod community really doing great works. 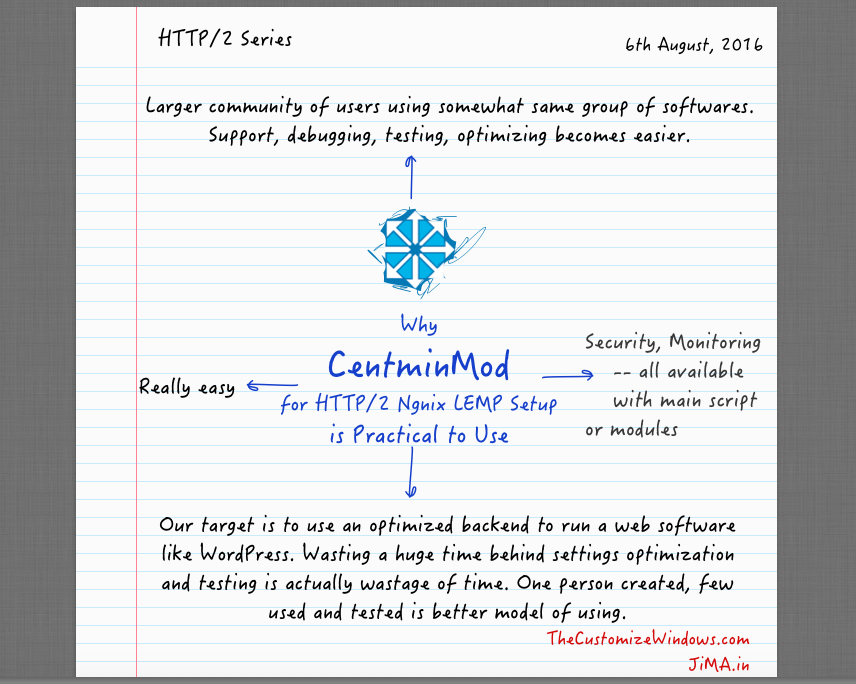 When and Why CentminMod for HTTP/2 Ngnix LEMP Setup?

Day by day backend settings becoming complicated involving many tests from webpagetest to tests by SSL Labs. Ubuntu and Debian are most commonly used distribution. It is really easy to work with Ubuntu with near zero experience. But sadly, CentminMod really became a bigger community with good works.

When you need CentminMod depends on you. If you feel that upgrading Ubuntu 14.04 to Ubuntu 16.04 giving pain or Nginx custom configuration is confusing you for APLN – APN, then possibly you need to test CentminMod. Why CentminMod, for that reason this guide is. We have explained our way of thought. We think, a webmaster should not waste huge time behind optimizing backend.

When and Why CentminMod for HTTP/2 Ngnix LEMP Setup?

Problems were not huge with Nginx SPDY with HTTP 1.1. The required modules, settings were quite easier than today. After HTTP/2 added, Nginx compilations became complicated. Furthermore, many larger service providers like CloudFlare started to distribute their developed patch for Nginx, like :

These are not quite practical to keep a track of the latest changes, test each against security and performance. CentminMod community has the same path applied on Nginx. There are lot of stuffs like Nginx Lua configurations :

They themselves have bigger community :

We like Percona over MariaDB. But CentminMod uses MariaDB as base option. That is not a big problem :

We are inclining to suggest our readers to think about CentminMod for HTTP/2 Ngnix LEMP Setup for the following reasons :

Something for Debian would be good, but really even closest does not exist at this moment.