Apache Kafka is Free Software, Along With it, Yahoo! Pulsar is Now Open Source Pub/Sub Messaging System as Option For Distributed System. Previously, we talked about Pub/Sub, that free cheap looking stuff has now became whooping $200/month stuff – superfeedr.com/pricing. Things have been changed. Here is the source code Yahoo! Pulsar :

Yahoo! is known to be used to take care of managing large-scale communications between various applications, obviously Open Sourced Yahoo! Pulsar presenting itself as an alternative to Apache Kafka. In recent times, there has been a growing number of projects which became open source. The latest contribution comes directly from Yahoo! with the published source code of Pulsar, which is a pub/sub (publish and subscribe) messaging system. The official blog of the company explains in details what exactly a pub-sub system and how it operates. In short, it is a messaging system by which multiple applications can communicate with each other. Yahoo! does have developments related to Apache Kafka :

The development of Pulsar was launched to meet the needs of Yahoo, they were looking for a solution that was able to guarantee scalability and low latency. When they started development, they have not been able to find any messaging that would ensure scalability, performance and functionality required by Yahoo! to provide a hosted messaging service and support to millions of topics. The deployment of the first Pulsar instance was made in the second quarter of 2015; since then known applications such as Mail, Sports, Finance, Gemini Ads and Sherpa lean to the system whose use has increased exponentially. In Pulsar, there are two categories, one of the publishers (who sends a message) and that of the subscribers (those who receive the message). The messages are not, scheduled to be sent to a specific recipient but rather divided into classes and published without that any subscriber reference. 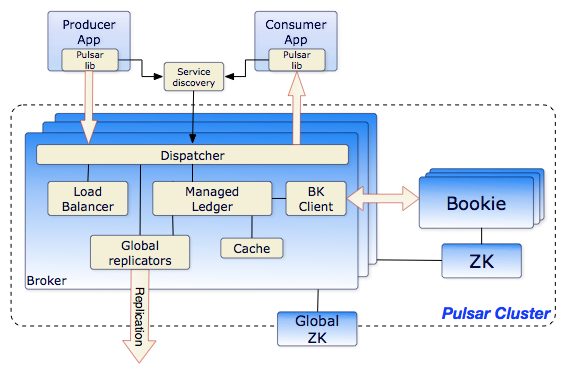 Each cluster is characterized by the presence of the following elements:

Yahoo! hopes to accelerate the development time of the project and to implement a number of improvements such as the speeding up of the topic of transfers between brokers (from 10 seconds to 1 second) and lowering of the times of the publications latency.