Advertisement
You are here: Home » Sort Down Processes By Memory Usage on OpenVZ
Advertisement

Analysis  of Memory Usage in OpenVZ Virtualization is Not Like Dedicated Servers. Here is How To Sort Down Processes By Memory Usage on OpenVZ. It is actually a difficult work to explore the low-level resources that were allocated while from inside the container. The reason behind this kind of search is 6GB RAM server at $7/month price. Previously, we discussed in details about the memory matters inOpenVZ vs KVM article. 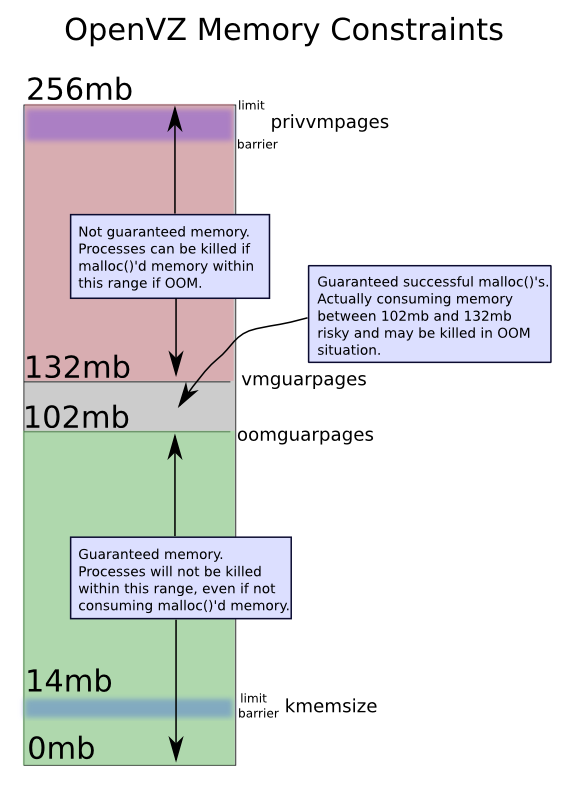 How To Sort Down Processes By Memory Usage on OpenVZ?

Normally on dedicated servers, we can check the GNU/Linux process memory usage with these commands :

If your OpenVZ instance is sucking 100% RAM when you can not explain the usage or data has mismatch (dashboard showing 100% usage but instance on SSH showing 40% usage), in such cases, you will see that the container is stable and processes are not generating Out of Memory (OOM) events. With 100% memory usage, it is not possible to expect a server to behave normally.

Itself the size reported by ps has little relation to actual memory usage. It is the virtual size of each process which isn’t necessarily allocated memory. It also doesn’t include some segments that are allocated.

You can run these two commands :

smem is a tool that can give numerous reports on memory usage on Linux systems. Unlike the other tools, smem can report proportional set size (PSS), which is a more meaningful representation of the amount of memory used by libraries and applications in a virtual memory system :

can show the near real usage. There is also memrank tool which lists processes in the system sorted by decreasing PSS.

How To Decrease Memory Usage on OpenVZ?

Memory accounted in Slab and in SReclaimable is considered as cached but will be freed upon request. Webservers like nginx, apache2 can running inside of a container can create this situation. With normal OpenCZ host account you can not directly fix it, you need to run these commands on main machine :

As normally you’ll not get that chance, you can use /etc/security/limits.conf file and change the default size or better do a tweak with ulimit. As example, processes launched from Apache can be altered from /etc/init.d/apache2 script by 512Mb by adding :

As lighttpd or nginx are multithreaded, so big stack per thread problem will remain. If you decrease the stack size any solution will have lower memory requirements.

Articles Related to Sort Down Processes By Memory Usage on OpenVZ