Advertisement
You are here: Home » What is Fog Computing, Fog Networking, Fogging
Advertisement

Fog computing is a system-wide architecture made up with near-user edge devices which is useful for deploying seamlessly resources and services for computing, data storage, network capabilities over the infrastructure that connects Cloud to the Internet of Things (IoT). Fog Computing is an extension and improvement of the Cloud paradigm in support of IoT applications that must comply with precise QoS (Quality of Service) parameters to be processed, such as latency and bandwidth available for a certain connection. In this article we will talk about what is Fog Computing, Fog Networking, Fogging. Fog networking consists of a control plane and a data plane. In the data plane fog computing embrace the computing services unlike traditionally on the servers in a data-center. Like cloud computing, fog computing also gives importance to the same parameters.

Fog is an architecture that uses one or many user devices, or located close to the user at the network limit, to perform a substantial amount of data storage, communication, and management. While the amount of data collected continues to increase as Big Data as well as the computing capacity needed to process them, on the other hand, the connectivity available to transport information from IT to datacenter does not always prove to be adequate for the purpose.

In particular, applications with stringent requirements in terms of response time or security are not supported at best by the current Cloud paradigm that requires data transfer from the network boundaries to centralized processing structures. For example, control of systems for industrial plants or public buildings, connected medical devices, and infrastructure for the efficient management of vehicular traffic.

Fog computing, exploiting the ability to calculate, store data and network physically close to the IT and highly distributed, aims to solve these problems. Fog Clouds, in the dual role of computing capability and filters from and to the Cloud, will enable support for time-sensitive applications with high bandwidth or specific IT security requirements (which do not allow you to move data over the Public Cloud Infrastructure). 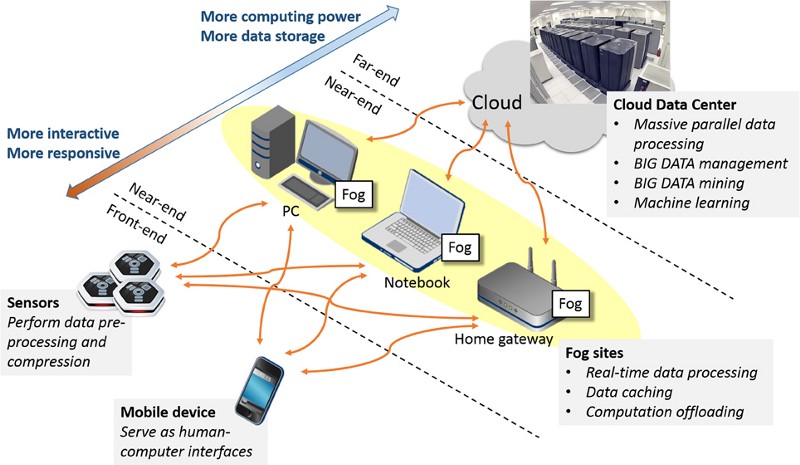 What is Fog Computing

Despite the paradigmatic and technological shift towards the Fog, it becomes increasingly necessary, a precise and shared definition of Fog computing needs to be given. Here, we tried to illustrate the current scientific debate by marking some of the definitions developed so far.

Fog computing is a highly virtualized platform that offers computing, storage and networking capabilities between terminal devices and traditional cloud computing datacenters. This is generally, but not exclusively, offered to the edge of the network. Some authors also point out that the Fog platform should enjoy a widespread geographic distribution and should be hierarchically organized to ensure that the immediate (or mid-term) analysis of collected information takes place as close as possible to the IoT sources, while analysis Data history can be performed at Cloud level. Fog features include location awareness, low latencies, capillary infrastructure distribution, high number and fog mobility, real-time interaction, predominance of wireless access to the network, interoperability and Federation between different operators.

The Fog extends the Cloud to be closer to IoT sensors and actuators. Fog nodes can be installed wherever there is Internet connectivity is present. Any device capable of computing, data warehousing and network connectivity may be a Fog mode (eg, industrial controllers, switches, routers, dedicated servers, and surveillance cameras). Analyzing IoT data near where they are generated minimizes latency. Reduces the load of the gigabyte internet traffic network; Maintains sensitive data within the private network. So the decentralized and ubiquitous devices communicate and potentially cooperate with each other and with the network in order to perform data storage or processing to support basic network functions or new services and applications running in a sandbox environment.

Furthermore, users can sell part of their devices to host such services in exchange for sharing incentives. This broad definition reveals more about Fog’s potential as a paradigm where network users and their devices are part and integral in offering services to the users themselves.

Tagged With what is fogability in communication

Articles Related to What is Fog Computing, Fog Networking, Fogging