By Connecting Arduino with Android, We Can Upload Code to Arduino, Use the Smartphone as Display, Controller or Use Various sensors. Here is How We Will Be Connecting Arduino with Android Smartphone. In our previously published article, we discussed about USB OTG (On-The-Go), using keyboard, mouse with smartphone using OTG. Basically Arduino is like those keyboard, mouse like electronic devices with an USB port. Previous articles are possibly useful to who are not used with some theories of electronics. We used photo from askix.com to illustrate.

We guess, you wanted to upload code to Arduino from Android. First here is short way, in later sub-header there is long answer. First install Bluino Loader like Android application. Then the easiest way even for a n00b is to connect Arduino with smartphone using ready to use OTG connector. Then simply upload code via that mobile application. You can upload Blink program to test :

There is reference of the constant LED_BUILTIN for different Arduino boards (it was just easy pin number 13 in early days of Arduino UNO) : 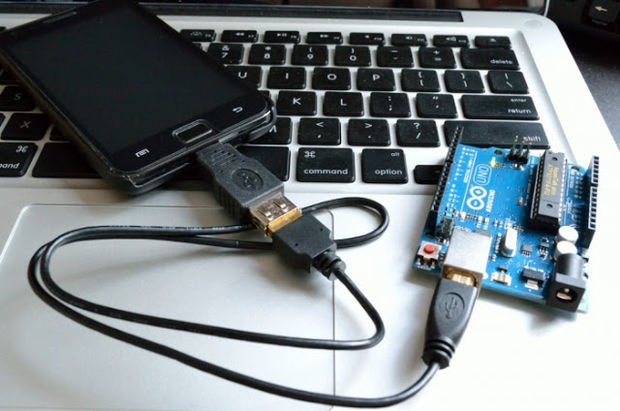 ArduinoDroid, APDE looks great but we saw that lightweight Bluino Loader does the job of uploading code to Arduino UNO. You can search Google Play store with the keyword “Arduino” :

There will be lot of innovative applications other than mere uploading code to Arduino. Those who know history of Arduino, they know about Wiring and Processing :

Processing has Android application which is far better for electronics IoT development than just Arduino :

There is other way for development :

That APDE has source code on GitHub :

Using Processing for Arduino is too big topic :

This Article Has Been Shared 659 Times!