The thing sounds like childish. It is True That is Very Easy Yet It is Important Basic Behind Using Sensors to Switch On/Off an Event. Here is Circuit Diagram and Code For Arduino 2 Push Button One LED to Switch On/Off Project. In our older how to guide, we have shown IR Sensor to switch off LED. As upgrade of the project, we can use that IR Sensor to switch off LED instead of pushing it with finger tip. In more advanced projects, we can use this idea on our older complex guides. With one push buttons previously we controlled servo motor’s direction towards left or right. You can understand that the complexity of our projects actually increasing. It is falsely appearing as if Arduino traffic light signal with LED timer was difficult. More we will increase push buttons for more actions, code will need nesting one inside another. If proper logic not followed, 99% correct circuit, code can fail.

For this project, you will need :

Circuit diagram of this project will go like this : 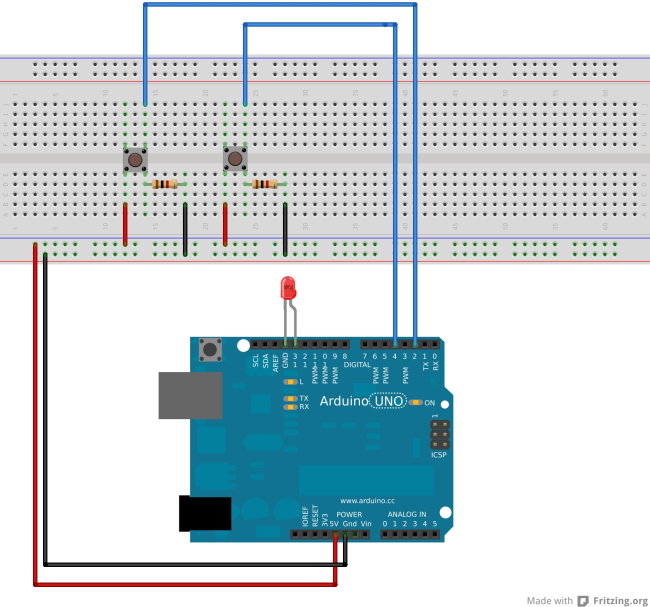 This is the code :

You need to notice the order :

If you change the order of buttons, the code simply may not work as expected. That is exactly what we wanted to say at the beginning – as Arduino adds an abstraction of real C or C++ language, for slightly difficult logic, things have higher chance to fail to upgrade own self.